Populist Press: Nancy Pelosi "Denied a Request to Activate the NG [National Guard] ahead of Jan. 6" 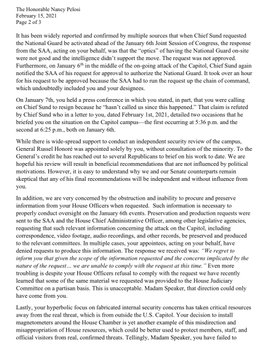 Populist Press reported that Nancy Pelosi "denied a request to activate the NG [National Guard] ahead of Jan. 6":

Breaking911
@Breaking911
JUST IN: Republicans have written a letter to Speaker Pelosi demanding answers as to why she denied a request to activate the NG ahead of Jan. 6, and why it took her over an hour while the attack was on-going to approve a request to authorize the NG [https://twitter.com/Breaking911/status/1361369725817782284?ref_src=twsrc%5Etfw%7Ctwcamp%5Etweetembed%7Ctwterm%5E1361369725817782284%7Ctwgr%5E%7Ctwcon%5Es1_&ref_url=https%3A%2F%2Fpopulist.press%2Fjust-in-pelosi-forced-to-fess-up%2F and https://populist.press/just-in-pelosi-forced-to-fess-up/]

Four Republican lawmakers are demanding answers from House Speaker Nancy Pelosi over her role in making security decisions on January 6, the day of the Capitol riot.

* When then-Chief Sund made a request for national guard support on January 4th, why was that request denied?