Before the Gore "37 days" Litigation & Recount, "2000 Washington Times: 'PRESIDENT BUSH Florida pushes Texan over the top with bare majority'" (This Headline is from the The Mitchell Archives: Five Centuries of Original Newspapers Website)

The Mitchell Archives website has this posted on their website: "November 8, 2000 Washington Times: 'PRESIDENT BUSH Florida pushes Texan over the top with bare majority.'" This apparent headline comes from "The Mitchell Archives: Five Centuries of Original Newspapers website [https://mitchellarchives.com/president-bush-wins-2000-electionbefore-the-fla-recount.htm]" and if true was apparently done before the Al Gore 37-days litigation and recount: 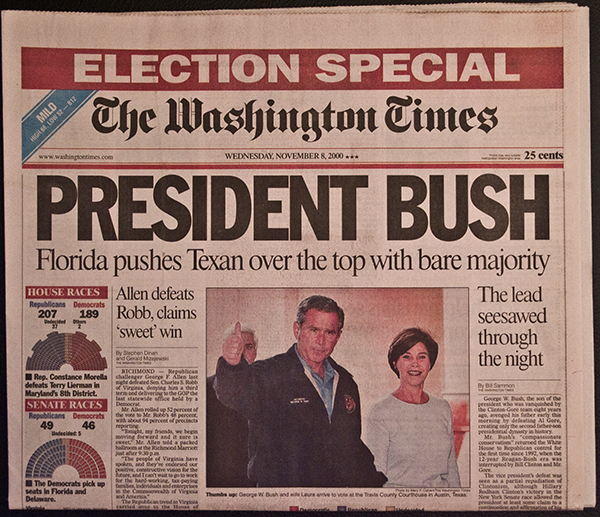 Mark Levin, a former chief of staff for the Attorney General of the United States, rightly stated:

The media do not declare who’s president-elect. There’s a constitutional and statutory process. Gore litigated for 37 days. Clearly the media want this ended today. [https://twitter.com/marklevinshow/status/1325144898060705792]

That said, remember the scene in "The Empire Strikes Back" when Vader puts a light saber to Luke's throat declaring, "You are beaten!". Luke wasn't beaten and neither was the Alliance but Vader sure would have liked Luke to think so.

Editor's Note: The Catholic Monitor found an image on google images that appeared to be real that read "November 8, 2000 Washington Times: 'PRESIDENT GORE Florida pushes Gore over the top with bare majority'" that was posted.  A reader informed us that it was not real so it was deleted and we made other corrections to the original post in line with that information. We found the apparent real front page and above posted that one to make that image correction, but kept most of the original post which was still valid. We apologize for the mistakes.