Is Francis the only Person on Earth not to hear about Roe v. Wade? They say he "Remains Silent," but doesn't that apparently tell you what he really Thinks? 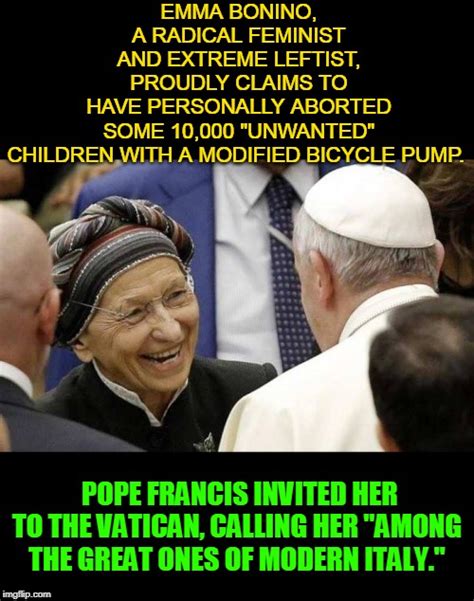 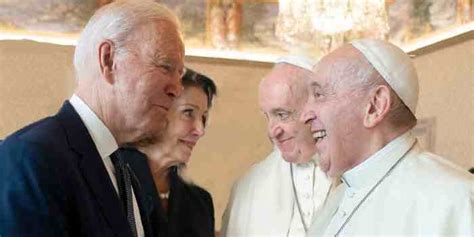 Holy Communion For Biden & Pelosi Not Up To Clergy But To Their Own Conscience | Canada Free Presscanadafreepress.com

Jorge Bergoglio has met numerous times with Italian Emma Bonino, former radical politician and perhaps the world's single most prolific abortion practitioner and advocate since it mainstreamed in the 1970's. He has praised her numerous times and met with her in extended visits. He has never said anything negative about her or her life's passion for abortion. He obviously cherishes both her and her work, killing children. That is a simple statement of fact.

Recently, a group of about a dozen mothers hiked through Europe from France to meet the "Pope" and beg him permission not to take the Traditional Latin Mass away from themselves and their children. He refused to meet any of them as a group, only one as a representative and the meeting lasted about two minutes.

It is clear who and what he is. Most people just find it inconceivable to admit it. The "Pope" supports sodomy, sex perversity, abortion, eugenics, totalitarian leftism ... and the destruction of all Sacred Tradition and Dogmas pre-existing Vatican II, as he calls it - "The" Council.

Catholics in a state of grace should be inoculated from such anti-Catholic pathogens. We have 2,000 years of Constant Magisterial teaching. If we choose to see, and believe, these deviations need not hold power over our faith. - Aqua [https://www.thecatholicmonitor.com/2022/06/culture-of-death-might-biden-francis.html]

I knew that something was drastically wrong with this Papacy when in 2015 Bergoglio made comments about:

breeding like rabbits and don’t be bead counters to the women offering rosaries for him.

Breeding like rabbits is a direct insult to God, Our Father - be fruitful and multiply.
Don’t be bead counters is a direct affront to Our Blessed Mother and Her Most Holy Rosary!!!!

While typing this, it has occurred to me that way back then, Bergoglio, the supposed Vicar of Christ on earth, insulted our spiritual Parents! - M.Murphy [https://www.thecatholicmonitor.com/2022/06/flashback-are-francis-cupich-pro.html]

Is Francis the only person on earth not to hear about Roe v. Wade? They say he "remains silent," but doesn't that apparently tell you what he really thinks?