St. Catherine's Advice to Cdl. Burke: Do Correction even if it brings Schism 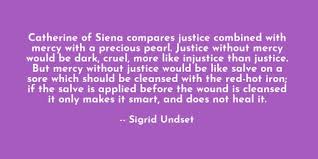 "This was Catherine's explanation of the uncanny ability she had to see to the very bottom of the souls of others... the sins of good people appeared to her as a stain on their beauty, when she met people who lived in mortal sin, she became aware of a smell so awful that she needed all her self-control not to show how unwell she felt" [Catherine of Siena: Undset, Sigrid ... amazon.com]

St. Catherine of Sienna was in the same situation that Cardinal Raymond Burke is now.

Catherine knew what Cld. Burke knows which is that if God's will is done, in terms of speaking the truth and reforming the Church, there will be a schism.

He fears that if he does God's will and issues the correction to Francis that there will be a schism.

The Cardinal needs to take the advice of St. Catherine who is not only one of the greatest saints in history, but a Doctor of the Church.

She knew that if she did God's will and got the French Pope Gregory XI to leave the French court of Avignon and return to Rome that there would be a schism.

Catherine knew that as long as Gregory stayed in France that would be no "reform" of "the morals of the clergy" and that the corrupt inner circle of the papacy would get more corrupt leading to the loss of more souls.

"Catherine replied: 'Who knows God's will so well as your Holiness, for have you not bound yourself by a vow---' Greatly shaken, Gregory stared at the young woman. He had made a vow that he would return to to Rome if he were chosen to be Pope--- it was while he was still cardinal. But he had not told a living soul. From that moment he knew he would leave Avignon." (Page 210)

Undset's biography shows the saint knew that her getting the Pope to leave Avignon would bring about a schism:

"Catherine replied... 'When the Pope really begins to reform the morals of the clergy they will rebel and split the Church.' No, there would be no new heresy, there would be schism. And she said to Raimondo and his friends that they would live to see this horror." (Page 194-195)

"Catherine had foreseen the schism. When she received the news of it, she must have known that her longing to throw herself into the tumult of battle would soon be fulfilled... she had still much to do here on earth. Because she knew the time was approaching when she should depart from this life." (Page 259)

St. Catherine reveal to Cardinal Burke that he will soon be departing from this life to meet the Living God. He must do God's will and not fear a schism.

Pray that the Cardinal correct Francis so more souls are not lost.

St. Catherine we ask you to pray that Cardinal Burke correct Francis.