From Sinner to Saint

St. Mary Magdalene is an example for all to emulate, in the sense that she was originally  a great sinner who was repentant and sought forgiveness. She was said to have been possessed by seven demons, which some believe may have been related to the seven deadly sins of: pride, covetousness, lust, anger, gluttony, envy and sloth. Who doesn't struggle with one or many of these sins?

St. Mary is a great example of Jesus' mercy and grace. When we are truly repentant of our sins and seek forgiveness in the sacrament of reconciliation, our sins are wiped away. This sacrament keeps us moving on the path to holiness. The sacrament of reconciliation is a beautiful gift where the Priests are "in persona Christi" and when they make the sign of the cross over the penitent and give absolution, forgiveness comes through Christ."If you forgive the sins of any, their sins have been forgiven; if you retain the sins of any, they have been retained.” John 20:23.

Jesus cast out the seven demons that held Mary Magdalene in bondage to her sins. After her conversion, Mary was a loyal follower of Jesus and  was present at his crucifixion and resurrection.

Church tradition states that Mary Magdalene lived the last thirty years of her life as a hermit in a cave, located in France. She spent her time in penance, prayer and spiritual contemplation. Additionally, legend states that Angel's came to Mary daily to give her holy communion and to take her up to hear the songs of the company celestial. Prior to her death she was taken by the Angels to the chapel of St. Maxim where she received viaticum and her final holy communion from a priest and died at the age of seventy two. During those thirty years her only sustenance was the most holy Eucharist of Christ's body and blood. (https://catholicism.org/saint-mary-magdalen-77.html)

A 2006 study published in Recovery Treatment Quarterly shows that there are lower rates of relapse when faith is involved in recovery. This goes to show that when one suffers with addiction to any sin, we can be assured there is forgiveness and we can start anew."For I will forgive their wickedness and will remember their sins no more." Hebrews 8:12.

In 398 AD St. Agustine wrote: " You have made us for yourself oh Lord and our heart is restless, until they rest in you." Addiction is rooted on an emptiness that we try to fill through drugs, alcohol, sex and other addictions. Our  ultimate goal in life is to know, love and glorify God.

This relationship with our creator is our purpose and fulfillment in which life flows from this relationship with God. So take heart in knowing that through repentance and the sacrament of reconciliation, the greatest of sinners can one day become one of the greatest saints. Of course this all depends on one's contrition, gratitude and love of God. " Wherefore I say unto thee, Her sins, which are many, are forgiven; for she loved much: but to whom little is forgiven, the same loveth little. 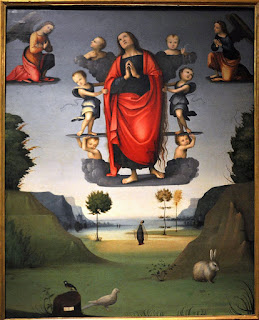 Elevation of Mary Magdalene
"This painting depicts Mary Magdalene being lifted into the sky by angels who, according to the Golden Legend, fed her during her harsh, self-imposed exile in the desert."-Gallerie Estensi
***
Francis Notes:

I see Reconciliation as important to me as Holy Eucharist. In it, I move to God. In Holy Eucharist, God moves to me. Both are essential to salvation. Together, they ARE the Gospel.
6:48 AM