Former NY Times Contributor Max Blumenthal: "Biden's arrogant anti-Russian sanctions have amounted to a price hike on working class Americans that have so far failed to weaken the Russian economy" 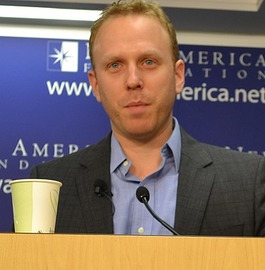 Max Blumenthal
maxblumenthal.comMax Blumenthal is an American journalist, author and blogger who is the editor of The Grayzone website. He was formerly a writer for The Nation, AlterNet, The Daily Beast, Al Akhbar, and Media Matters for America, and has contributed to Al Jazeera English, The New York Times and the Los Angeles Times.Wikipedia

@MaxBlumenthal
Biden's arrogant anti-Russian sanctions have amounted to a price hike on working class Americans that have so far failed to weaken the Russian economy. His neocon policy accelerates the process of de-dollarization, diplomatic isolation & imperial decline.

The mainstream new outlet the Tablet also asked "Is America the Real Victim of Anti-Russia Sanctions?":

Remember the claims that Russia’s economy was more or less irrelevant, merely the equivalent of a small, not very impressive European country? “Putin, who has an economy the size of Italy,” Sen. Lindsey Graham, R-S.C., said in 2014 after the invasion of Crimea, “[is] playing a poker game with a pair of twos and winning.” Of increasing Russian diplomatic and geopolitical influence in Europe, the Middle East, and East Asia, The Economist asked in 2019, “How did a country with an economy the size of Spain … achieve all this?”

Seldom has the West so grossly misjudged an economy’s global significance. French economist Jacques Sapir, a renowned specialist of the Russian economy who teaches at the Moscow and Paris schools of economics, explained recently that the war in Ukraine has “made us realize that the Russian economy is considerably more important than what we thought.” For Sapir, one big reason for this miscalculation is exchange rates. If you compare Russia’s gross domestic product (GDP) by simply converting it from rubles into U.S. dollars, you indeed get an economy the size of Spain’s. But such a comparison makes no sense without adjusting for purchasing power parity (PPP), which accounts for productivity and standards of living, and thus per capita welfare and resource use. Indeed, PPP is the measure favored by most international institutions, from the IMF to the OECD. And when you measure Russia’s GDP based on PPP, it’s clear that Russia’s economy is actually more like the size of Germany’s, about $4.4 trillion for Russia versus $4.6 trillion for Germany. From the size of a small and somewhat ailing European economy to the biggest economy in Europe and one of the largest in the world—not a negligible difference.

One telling barometer for this dynamic is oil. With Western oil sanctions on the world’s largest oil exporter, prices have predictably skyrocketed, rising from around $75 a barrel at the beginning of the year up to over $110 today. But countries that have refused to participate in sanctions are now taking advantage of the opportunity to negotiate for Russian energy deliveries at steep discounts. If Russia is still able to sell oil around the world, countries like India are able to negotiate for below-market prices, and Western consumers are being hammered with inflated prices, who is really being sanctioned? A similar principle applies to the weaponization of the U.S. dollar and the Western financial system in general: If non-Western countries are increasingly told that access to dollars and transaction systems like SWIFT are conditional on policies made in Washington that may not necessarily be in their own self-interest, the result may be a de-dollarization of the global economy, not a strengthening of the Western order. [https://www.tabletmag.com/sections/news/articles/is-america-the-real-victim-of-anti-russia-sanctions]