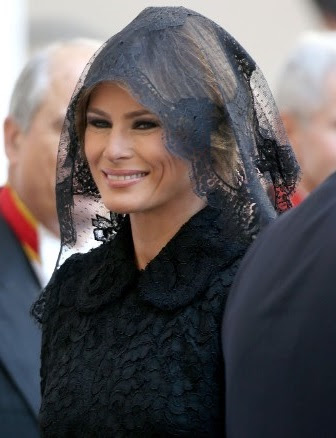 Yesterday, the always insightful Catholic blogger, Joseph Ostermeir, had a fun post titled "Donald Trump's Path to Catholicism?". I am posting the entire piece because he asked "I don't know how, but any chance someone can pass this on to someone who knows them?" I happen to know two persons who read the Catholic Monitor who to some extend know Steve Bannon:

Call this delusions of grandeur, but what if we can somehow communicate this info to Donald and Melania Trump, in particular Melania?

From my Okie armchair, it seems to me Donald can get his first two marriages annulled by the Church, based on traditional pre-Vatican II grounds, so the civil marriage to Melania can be validated, she can return to full communion with the Church, and Donald himself can even convert.

Donald's first civil marriage was to a woman previously married.  Done deal, that would be rendered invalid.  And to validly marry a second time, he would have needed an annulment of the first marriage, which he didn't have, so there you go, the second one would also be invalid.  I'm no canon lawyer, but has anyone explained this to Melania?  She still considers herself a Catholic.

And, here's the kicker, there are two Traditional Latin Masses just a few miles from their home in Palm Beach, one, I believe the nearest, at an SSPX chapel.  They both have struck me as people who would greatly appreciate the Ancient Mass, and Catholic Tradition.

I don't know how, but any chance someone can pass this on to someone who knows them?  One thought is Frank Walker at Canon212, who apparently knows Steve Bannon, who has said he frequents C212, who I hear is a Catholic with a background in the Latin Mass, could post this and alert Steve, and Steve could forward it to Donald.  Something. You never know.  One day Donald and Melania Trump could become practicing, traditional Catholics. [http://okietraditionalist.blogspot.com/2021/02/donald-trumps-path-to-catholicism.html]

If Donald isn't ready to convert to Catholicism, he should do this for his beautiful and loyal wife, Melania, so she can return to the sacraments.