President Trump: “Left-wing Rioting and Mayhem are the Direct Result of Decades of Left-wing Indoctrination in our Schools" 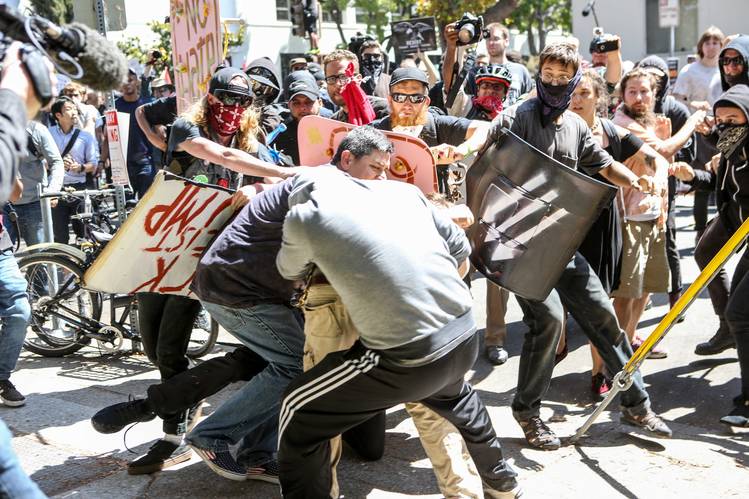 The Epoch Times reported that President Donald Trump declared that “left-wing rioting and mayhem are the direct result of decades of left-wing indoctrination in our schools”:

Rejecting what he said is a false, cynical version of American history taught in elementary and secondary schools across the country, President Donald Trump recently unveiled a new nonprofit that’s tasked with designing educational materials aimed at accurately depicting the nation’s history.

There’s no time to waste, Trump said during the White House Conference on American History on Sept. 17 (Constitution Day).

There is a “left-wing cultural revolution” underway that “is designed to overthrow the American Revolution,” said Trump, who also stated that “left-wing rioting and mayhem are the direct result of decades of left-wing indoctrination in our schools” that has “gone on far too long.” [https://www.theepochtimes.com/new-nonprofit-aims-to-take-back-american-history-from-the-radicals_3519338.html]

What besides "decades of left-wing indoctrination in our schools” has produced the leftist Fascist-like youth BLM/Antifa riots?

C. Britt Beemer, thought that the Columbine shooting had changed our country's mindset. His surveys show 70% of parents now think danger in schools will continue to increase. “Informed parents” are, also, dissatisfied with public school's drugs, peer pressure, and poor teaching. He sees a trend towards single income families and home schooling.

John Taylor Gatto — former New York City and State Teacher of the Year — documents how the education system purposely has created a mass of illiterates. His book, The Underground History of American Education, demonstrates that in 1840 — before public education — 93% to 100% of poor and rich had “complex literacy.”

Justice Department records show that violent criminals are overwhelmingly (80%) illiterate. Since WWII, as illiteracy increased, so did crime. Out-of-wedlock births quadrupled and in the 60's “bizarre violence … became common.”

Why the “dumbing down”? Gatto documents that throwing money at education is a waste unless certain instituted changes are reversed. The first “well-documented” change that gave rise to illiteracy was the American schools' massive conversion to “non-phonetic ways of teaching reading.”

Then, in the 1960's, schools began replacing Christian morality and discipline with reinforcement schedules. There was no longer right or wrong, only the sterile, therapeutic concepts of “positive and negative reinforcement” to maintain the “social order.” It doesn’t take a rocket scientist to figure out why in the 60's “bizarre violence… became common.”

And teachers that were true educators, like Jaime Estalante of Stand and Deliver fame, and teachers-of-the-year like John Gatto were weeded out. Look it up on the Internet — they were both forced out. We all can remember two or three good teachers like Estalante and Gatto, but they were the exceptions, not the rule.

If it is true — as Gatto with overwhelming evidence shows in his book — that the educational system purposely has created a mass of illiterates, and if Justice Department statistics are true that violent criminals are overwhelmingly (80%) illiterate, then is it possible that the education system is creating a Communist "army of monsters"?

Renowned statistician William Briggs is right in saying that public schools are creating a Communist "army of monsters" that needs to be "[d]efund[ed]... [i]mmediately":

This was written in a fit of optimism, and with the tacit assumption that you should no longer go to college or let your kids go to college.

I cannot insist on this strongly enough. You should consider removing your children, if you love them, from all public schools. Home school if you can. In any case, get them out of college.
If you are a professor who still believes in Truth and Reality now is your time to be a man. Go down fighting. Do not get purged as a coward...

... If there is an interest in a trade school for grievance studies, why, they can create one for that, too. As it is, a griever emerges from a college with a “degree” which tells its holder she is much smarter and more deserving of respect than she really is. Just as the blubber, piercings, and blue hair dye hide her beauty, the “degree” disguises her mental weaknesses. Colleges are the Dr Frankensteins who created the army of monsters, Karens and Karls, who think they know something because a piece of paper says they do.

We barely listed the benefits of defunding colleges and universities. It would eliminate the farce of “amateur” sports, it would cancel High school, it would keep schools lean and as free as possible from infiltration, it would lessen publish or perish, it would to some extent lift the weight of government influence over research. Kids get jobs and start families earlier, without all that de rigueur campus “experimentation”.

Even if none of that is true, there are scarcely any weakness to the plan. It therefore has no chance whatsoever of being implemented—until the restoration.
[https://wmbriggs.com/post/31306/]

Moreover, public education was meant to be Communist "from the start" according to an Epoch Times expose:

This article is part 10 in a series examining the origins of public education in the United States.

The U.S. public school system was collectivist from the start, as this ongoing series on government education has extensively documented. But as the feds got involved, it quickly went from bad to worse, with the slow and steady decline in education turning into a precipitous collapse.

Today, the schools are a disaster, even by the government’s own measures. Consider, for instance, that the latest scores from the federal government’s National Assessment of Educational Progress revealed that more than two-thirds of eighth-graders aren’t proficient in any core subject. It would be hard to do worse...

... But communists worked diligently toward that goal for decades. In his 1932 book, “Toward Soviet America,” Communist Party USA leader William Z. Foster boldly outlined the agenda for his fellow revolutionaries. The goal: A U.S. Department of Education that would eventually replace patriotism and Christianity in school with communism and globalism...

... Today, even with a Republican president in the White House, the Department of Education remains firmly under collectivist control. During the 2016 presidential election, for example, an analysis by The Hill revealed that 99.7 percent of all political spending by Department of Education bureaucrats went to Hillary Clinton—the highest of any federal department.

Even after Secretary of Education Betsy DeVos took up her post, the left-wing extremism from the department continued to spew forth. Indeed, on Feb. 12, 2017, the department’s Twitter account posted a quote by Communist Party USA member W.E.B. Du Bois—with his name misspelled, no less, drawing national ridicule.

Among other absurdities, Du Bois claimed the USSR, led by one of the most brutal and murderous regimes in human history, was the “most hopeful country on earth.” During the darkest depths of the “Great Leap Forward,” Du Bois even held multiple meetings with mass-murdering communist Chinese dictator Mao Zedong, and the two were always pictured with smiles on their faces.

These are some of the people who control U.S. education. Under the previous administration, the department, using “stimulus” money to bribe states into compliance, even imposed Obama-backed national standards on the nation—standards that are aligned with international schemes, too. Common Core will be dealt with in a future article in this series...

...  Liberals and progressives, of course, don’t want Trump in charge of their children’s education, any more than conservatives want Obama or Biden running it.

Alex Newman is an award-winning international journalist, educator, author, and consultant who co-wrote the book “Crimes of the Educators: How Utopians Are Using Government Schools to Destroy America’s Children.” He also serves as the CEO of Liberty Sentinel Media and writes for diverse publications in the United States and abroad.
[https://www.theepochtimes.com/the-rise-of-fed-ed-sped-up-the-demise-of-real-education_3163547.html]