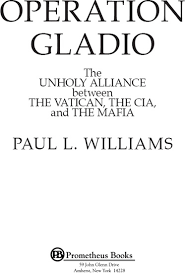 ... With all of this in mind, and wishing the best for our country as well as for Catholics worldwide, we believe it to be the responsibility of loyal and informed United States Catholics to petition you to authorize an investigation into the following questions:

- To what end was the National Security Agency monitoring the conclave that elected Pope Francis? [6]

-  What other covert operations were carried out by US government operatives concerning the resignation of Pope Benedict or the conclave that elected Pope Francis?

-  Did US government operatives have contact with the “Cardinal Danneels Mafia”?  [7]

-  International monetary transactions with the Vatican were suspended during the last few days prior to the resignation of Pope Benedict.  Were any U.S. Government agencies involved in this? [8]

-  Why were international monetary transactions resumed on February 12, 2013, the day after Benedict XVI announced his resignation? Was this pure coincidence? [9]

-  What actions, if any, were actually taken by John Podesta, Hillary Clinton, and others tied to the Obama administration who were involved in the discussion proposing the fomenting of a “Catholic Spring”?

- What was the purpose and nature of the secret meeting between Vice President Joseph Biden and Pope Benedict XVI at the Vatican on or about June 3, 2011?

-   What roles were played by George Soros and other international financiers who may be currently residing in United States territory? [10]

We believe that the very existence of these unanswered questions provides sufficient evidence to warrant this request for an investigation.

Thank you again, and be assured of our most sincere prayers.

Former FBI consultant and journalist Paul Williams, PhD, in his 2015 book on the CIA and the Vatican wrote:

"On March 13, 2013, Cardinal Jorge Mario Bergoglio ascended to the throne of St. Peter as Pope Francis I. The nagging questions about his background may never receive a satisfactory answer. Nor will concerns that the CIA manipulated the [papal] election as it had in the past with Juan Peron. Argentine journalists and scholars with insight into the Agency's [the CIA's] activities in their country have labeled Bergoglio 'Washington's Pope.'"
(Operation Gladio: The Unholy Alliance between The Vatican, The CIA and The Mafia, Page 126)

The former FBI consultant apparently is claiming that his Argentine sources with "insight" into the American Deep State in their country were labeling:

Is it possible that Francis could be part of an Obama/CIA operation?

A leftist professor who is in agreement with the Francis's leftist agenda wrote on August 29, 2018 that Francis "played a direct and complicit role in" the killing and torturing of the Argentinian military dictatorship's 'Dirty War' which was known by the [Obama] US State Department":

"Prior to his election by the papal conclave, the role of Jorge Maria Bergoglio in Argentina’s “Dirty War” was known and documented.  It was known to the [Obama] US State Department. It must have been known to one or more of the 115 'Cardinal Electors' of the Papal Conclave which convened at the Sistine Chapel on March 12, 2013. Needless to say, both the Catholic Hierarchy and the international community turned a blind eye. And the media through 'omission' has remained silent."[https://www.google.com/amp/s/www.globalresearch.ca/washingtons-pope-who-is-francis-i-cardinal-jorge-mario-bergoglio-and-argentinas-dirty-war/5326675/amp#ampshare=https://www.globalresearch.ca/washingtons-pope-who-is-francis-i-cardinal-jorge-mario-bergoglio-and-argentinas-dirty-war/5326675]

Moreover, the CIA online library reports that they were involved with Jacques Maritain who was a very close collaborator of Pope Paul VI:

"Agency files reveal the true origins of the Berlin conference... helped to solidify CIA's emerging strategy of promoting the non-Communist left... the Agency's political operations against Communism over the next two decades."

"I am a disciple of Maritain. I call him my teacher.
(The Remnant, "Saul Alinsky and 'Saint' Pope Paul VI: Genesis of the Conciliar Surrender to the World, by Christopher A. Ferrara, August 16, 2018) [https://remnantnewspaper.com/web/index.php/articles/item/4029-rules-for-radicals-when-paul-vi-met-saul-alinsky]

"Sub-source stated that the appointment of Jacques Maritain as French ambassador to the Holy See one of the greatest problems to the Holy See, because Maritain... is a well-known leftist, who advocated a close collaboration with progressive-minded Catholics and radical elements, even Communists... The Maritain presence in the Vatican will be the focus of all such movement throughout the world. The State Secretariat expects Maritain to be the focus of all such movements"
(Office of Strategic Services, Date of Information: 10 February 1945, ZSOLT ARADI VOL. 1_0107, PTF doc. 11316 and [https://en.m.wikipedia.org/wik i/Pope_Paul_VI])

Another possible CIA operative besides Maritain who was a top architect of Vatican II on the "Declaration on Religious Liberty" was Fr. John Courtney Murray. Church Militant reported:

""Murray and his crowd of CIA operatives and TIME Magazine won the day, helping American Catholics buy into the proposition of the separation of Church and State and calling it 'religious liberty.'"
(Church Militant, "The Vortex - The CIA's Priest," November 11, 2015) [https://www.churchmilitant.com/video/episode/vort-2015-11-11]

The Remnant, also, revealed America Magazine might be another Deep State propaganda operative:

" [The] globalist establishment... Murray, SJ, push[ed] liberalism at the Second Vatican Council with documents such as Dignitatis Humanae as well as a slew of publications... One of the major outlets through which... Murray pushed his Americanism [heresy] was... America [now edited by Francis appointed consultor to the Vatican's Secretariat for Communications Fr. James Martin]."
(The Remnant, John Podesta's Catholic Spring Part IV: America Magazine LeftCat Kitty Litter or Deep State Propaganda?". February 29, 2019) [https://remnantnewspaper.com/web/index.php/articles/item/4029-rules-for-radicals-when-paul-vi-met-saul-alinsky]

And to end on a coincidence, if Pope Pius XII hadn't died of two stokes on October 8, 1958 it is possible that Paul IV's Vatican II might never have happened since two of its main architects would have been condemned.

In 2008, the liberal Catholic World admitted that Pope Pius XII was "preparing" to condemn probably the main architect of Vatican II Jacques Maritain and another architect of the Council John Courtney Murray "who "played a role in... Declaration on Religious Liberty":