Is the "Biden... Selling of Oil From Reserve to Hunter Biden-Tied Chinese ['Enemy'] Firm" an "Impeachable" Offense? & Did "Obama Spearhead... [Hunter... Fund[ed]] Bio-Weapon Lab in Ukraine"? 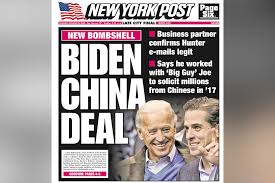 Tucker Carlson: Biden should be impeached for sending our natural assets to our enemy China

The Epoch Times reported that Joe Biden may be "impeachable":

The Biden administration’s move to sell nearly 1 million barrels of oil reserves to China “defies all common sense” and is benefiting U.S. adversaries at the cost of national interests, said Republican lawmakers, with some calling the action “impeachable.”

The Department of Energy in April sold 950,000 barrels of Strategic Petroleum Reserve to Unipec America, the U.S. arm of China’s largest trading company Unipec, which is wholly owned by China Petrochemical Corporation, also known as Sinopec.

Sinopec is a state-run Chinese oil and gas enterprise based in Beijing that has been tied to President Joe Biden’s second son, Hunter Biden, whose foreign business transactions have fueled growing scrutiny.

The sale, though little noticed at the time, is drawing heavy backlash from Republican lawmakers. As the U.S. Strategic Petroleum Reserve (SPR), the world’s largest emergency supply of crude oil, tank to a historic low while Americans nationwide feel the pinch of soaring gas and diesel prices, such a move runs counter to American interests and is putting national security at risk, the officials said.

“The Biden Administration should not be sending our reserves, which we need for our country, to China. It is foolish and defies all common sense,” Sen. Marco Rubio (R-Fla.), who in June introduced a bill to ban oil export to China, told The Epoch Times.

According to the reports, Moscow said that Hunter Biden secured finance to fund the US military ‘bioweapons’ research program in Ukraine. The leaked emails, accessed by Hunter Biden’s laptop, showed that he had helped secure millions of dollars of funding for Metabiota, a Department of Defense contractor specialising in research on pandemic-causing diseases...

... This shocking revelation comes at a time when the United States government is facing intense scrutiny over funding risky, “gain-of-function” research in Wuhan at a Chinese Communist Party-run lab with military ties, which may have been the source of the coronavirus pandemic.

Recently, the Russian Defence Ministry had stated that they had found evidence of US-funded Biolabs in Ukraine, which had urgently destroyed samples of deadly pathogens when the ‘military operation’ started.

This is two days after Russia claimed that Ukraine was close to building a plutonium-based dirty bomb nuclear weapon. On March 6, Moscow’s Foreign Ministry had tweeted that Russian forces found evidence that Kyiv was eradicating traces of the military-biological program in Ukraine, financed by the Pentagon.

On several occasions, Russia had accused the US and Ukraine of developing bio-weapons close to its borders. In 2021, while talking about the inability of the World Health Organisation to establish the origin of the Covid-19 virus, Russian Security Council Secretary Nikolai Patrushev told Kommersant reporter that Russia believed the US was developing bioweapons near its borders.

The war between Russia and Ukraine broke out on February 24 when Russia began a full-scale invasion of Ukraine through neighbouring countries. [https://www.opindia.com/2022/03/baraka-obama-spearheaded-bio-weapon-lab-in-ukraine-hunter-biden-secured-funding-reports/]