What are the Motives of Biden's "Zelensky, the Spike-Heeled ['Homoerotic'] Dancing President of the Ukraine" for "refus[ing] to be NATO Neutral; [&] for that reason... Plunging us all into a World War"? 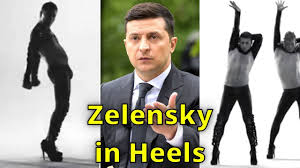 Volodymyr Zelensky is dancing in heels ...

Above: Ukrainian President Zelensky (2nd from left) and three other men perform a homoerotic skit on Ukrainian television.

Zelensky, the Spike-Heeled Dancing President of the Ukraine

The so-called peace loving Francis Catholic media that is apparently pro-Covid lockdown/vaccine as well as possibly pro-World War III has been attacking Archbishop Carlo Maria Viganò for explaining why the pro-abortionist Joe Biden establishment media have almost instantly switched narratives from Covid to warmongering for WWIII.

The Okie Traditionalist website gave a good summary of why the possibly pro-World War III Catholics are mad at Archbishop Viganò for opposing their narrative. He is destroying their unbalance pro-Biden/"Volodymyr Zelensky is dancing in heels" warmongering narrative:

It is refreshing for a traditional Catholic Archbishop such as Vigano, perhaps the only one doing this, to lay it all out publicly.  A man once entrusted as representing the See of St. Peter as nuncio over all the American bishops.

He talks about the need for negotiations to prevent world war, to admit to violations of rights, to ensure rights on all sides.  He points his finger at the globalist elites violating Russia's rights, and trying to take over all Europe since 1990, forcing contemporary Western values (abortion, LGBTQ, etc) on the world.  He laments the hypocrisy of the West controlling eastern Europe for its own power and gain, while condemning Putin for protecting his own sovereignty and border.  It spells out the Ukraine 2014 coup engineered by NATO, and how Zelensky is nothing more than a liberal globalist comedian, bought and paid for with corrupt money, used to start war with Russia.  And how Soros has sponsored a color revolution of truly neo-Nazi institutions supported by the NATO-controlled, installed Ukrainian government.  The facts speak for themselves.

This is a good read, but long.  Yet it spells out the "true narrative" that nobody will get from mainstream Western media with its false narrative of "a dictator Putin trying to expand Russian territory at the expense of killing innocent citizens."  Which many can now see is a load of B.S.  Zelensky refuses to be NATO neutral; for that reason he is plunging us all into a world war. [http://okietraditionalist.blogspot.com/2022/03/archbishop-vigano-speaks-on-russia.html]

The Mundabor website gives a possible explanation of what some of his motives could possibly be for "refus[ing] to be NATO neutral; [and] for that reason... plunging us all into a world war":

Still, after a week at the latest it was abundantly clear that the West would not intervene, and the EU would not even do without gas and oil. What followed was a kabuki theatre in which the Western Nations do everything to make people forget that they are financing Putin’s war, every day, with their own money. In fact, it is very realistic to say that Putin is now making more money out of rising energy prices than he is leaving on the table because of sanctions. Energy prices and sanctions which, both, will severely punish the West, now auto-sanctioning itself with high energy prices, loss of income, and big production disruptions.

Zelensky, from his vantage point, now sees his Country slowly but surely being shellacked to pieces, and the Russian restraint we have seen in the first weeks of operations is, if you ask me, not going to continue.

At some point, it’s going to be Grozny all over again, and without any reasonable hope of victory for the Ukrainians.

If you ask me, he is playing a cynical game. He does not want to be a reasonable loser. He wants to be a hero standing on the debris of his destroyed Country.

The Country will be half destroyed, but he will be (literally) quite the shit. He will be offered exile to the US, where book publishers will give him 20 millions for his book, and Netflix double as much for documentaries.

He will be the apostle of the peace he did not want to make.

He will be the new Yassir Arafat, fattening on the suffering of his people.

The alternative is, to him, a losing one. Accepting the very reasonable Russian conditions would make of him an intelligent loser, but a loser still. You don’t get 40 millions from Netflix for signing a treaty giving them what they want, and in this perspective, how many military and civilian lives are spared is immaterial. Zelensky is interested in building his own monument, not in saving destruction for his Country. [https://mundabor.wordpress.com/2022/03/09/building-your-own-monument-president-zelensky-netflix-and-the-twitter-wars/]