DEBATE: Is Benedict Still Pope?
Today is the nine year anniversary Pope Benedict announced his resignation to the world (February 11th, 2013). Today's debate answers the question: was Benedict's resignation valid; and of not, IS BENEDICT STILL POPE?
Todays debaters are:
Dr. Ed Mazza is former Full Professor of History at Azusa Pacific University and host of “The Bar of History” at VirginMostPowerfulRadio.org. Mazza is the author of The Scholastics and the Jews: Coexistence, Conversion and the Medieval Origins of Tolerance from Angelico Press. His online classes in Church and World History are available at edmundmazza.com
Steven O’Reilly is a graduate of the University of Dallas and the Georgia Institute of Technology. He writes for the blog RomaLocutaEst, He has had articles appear in the old Catholic Answers magazine, "THIS ROCK," One Peter Five, and LIFESITENEWs. He is working on a historical fiction trilogy entitled PIA FIDELIS set in the time of the Arian Crisis, and the rise Julian the Apostate. Book I, "PIA FIDELIS: The Two Kingdoms", is available for order on Amazon and other sites. He is a former intelligence officer, who served in the Clandestine Services of the CIA. He lives in Georgia with his wife, Margaret. He has four sons, and new granddaughter. [https://player.fm/series/timothy-gordon-rules-for-retrogrades-podcast/debate-is-benedict-still-pope]

Dr. Edmund Mazza and Steven O’Reilly on the Rules for Retrograde podcast debated on “The Resignation of Pope Benedict XVI.”  It can be found here.

Here is some stuff on Rumble and Twitter on the debate as well as on whether Benedict is still pope:

The recent 'BiP' debate with Dr. Mazza and Steven O'Reilly, made me recall the article by @CionciAndrea from last July, wherein he responds to 3 objections (from @S_OReilly_USA) wrt Pope Benedict XVI's "Plan B". 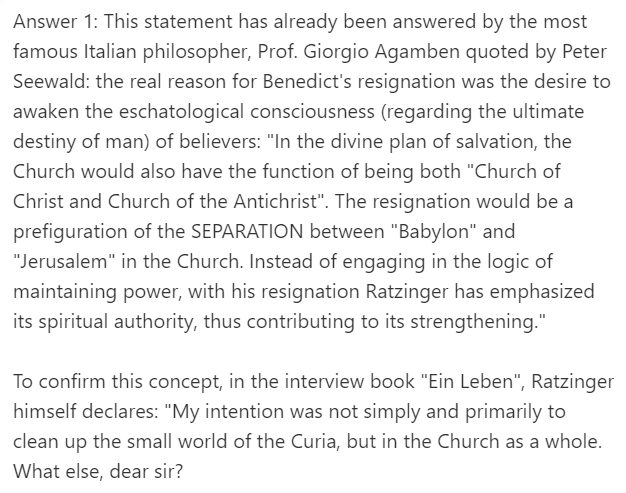 Here is the video of the debate between Dr. Mazza and myself on @timotheeology R4R show.  Debate resolution:  Benedict’s resignation was invalid due to “substantial error.” Dr. Mazza was the ‘yes’ ; I took ‘no’ position. [https://twitter.com/S_OReilly_USA/status/1492297551231467520]

Will there be coffee in the gulag?@CoffinMedia

And now: shiny jagged red pill evidence that the Feb/2013 abdication by @P_BenedictXVI (who, if you click on it, is still called "Pope Benedict XVI") was fatally flawed, and the Mar/2013 election of Bergoglio was likewise null: [https://twitter.com/CoffinMedia/status/1491929325938962432]

Seven Pieces of Evidence That Francis Is an Antipope

Here are Coffin's 7 pieces of evidence:

1) The term “pope emeritus” has no precedent and is confusing
2) Pope Benedict XVI seems to have resigned only part of the papacy, the active ministerium, not the office or munus of the papacy
3) Pope Benedict’s longtime personal secretary Archbishop Georg Gänswein has made statements that appear to affirm Benedict’s continued papal identity
4) Pope Benedict’s correct form of address is still “Your Holiness”
5) There are at least three errors in the official Latin “declaratio” read by Pope Benedict on February 11th 2013
6) “Universal peaceful acceptance by the Church of Francis has never really occurred.
7) The canonically illegal behavior of the St. Gallen Mafia cardinals in conspiring to vote in their man from Buenos Aires in 2013 invalidates the Conclave. [https://www.patrickcoffin.media/seven-pieces-of-evidence-that-francis-is-an-antipope/]