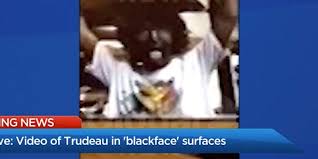 It is bizarrely incongruous that Joe Biden who according to the Washington Post was a collaborator with the Democrat "'Segregationist[s]' [which] barely begins to describe the racist Dixiecrats that Joe Biden worked with in the Senate" is calling others racist for calling for America and Canada to allow such freedoms in their countries as are allowed in Japan which doesn't believe in forced injections and discrimination:

Japan's Vaccination Policy: No Force, No Discrimination - The Epoch Times...

It is equally ridiculous for "blackface" Justin Trudeau to be accusing the Freedom Trucker Convoy of being racist:

Are a good percentage of Blacks starting to see that the Biden/Trudeau forced injection mandates are a form of discrimination?
The liberal Intelligencer reported that the mandates may be the reason that "Biden Is Bleeding Black Support":
There are other explanations for Biden’s difficulties with Black voters that have stronger empirical support. Chief among these is the unpopularity of his vaccine-mandate policy with a small but significant minority of Black Democrats.

Morning Consult’s national tracking poll shows a stark inflection point in Biden’s Black support immediately after the announcement of the mandate. Between September 8 (the day before the mandate’s rollout) and September 20, Biden’s support among Black voters fell by 12 percentage points in the survey. One might write this off as a coincidence, had the pollster not specifically monitored Biden’s standing with unvaccinated Black voters — and found that he had lost 17 points with that segment of the electorate over those two weeks.

As noted above, a post-September decline in Biden’s Black support has been captured in other polls. And there is no analogous inflection point (yet) showing a similar decline in the immediate aftermath of a legislative setback on voting rights. That Biden’s vaccine mandate would hurt his Black approval more than his failure to deliver on voting rights makes some sense. [https://nymag.com/intelligencer/2022/01/why-joe-biden-is-bleeding-black-support.html]

The crowd protesting in front of Carmine’s restaurant in Manhattan chanted “Carmine’s are racist,” according to reports"

“Having a vaccination card does not protect you from discrimination,” said Chivona Newsome, co-founder of Black Lives Matter of Greater New York. “The 1964 Civil Rights Act prohibits the actions of Carmine’s. It says it is illegal to discriminate against you on the basis of race.”

She added, “Seventy-two percent of Black people in this city from ages 18 to 44 are unvaccinated. So what is going to stop the Gestapo, I mean the NYPD, from rounding up Black people, from snatching them off the train, off the bus?” [https://www.washingtontimes.com/news/2021/sep/21/black-lives-matter-calls-covid-19-vaccine-mandates/]