Were all the Antipopes until Francis Catholics? Can a Heretic be a Pope? What makes you a Pope or an Antipope? 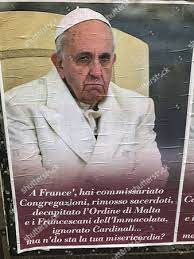 "We have come to the point that even simple people with little knowledge of doctrinal issues understand that we have a non-Catholic pope, at least in the strict sense of the term. This poses some problems of a canonical nature that are not inconsiderable, which it is not up to us to solve but which sooner or later will have to be addressed." - Archbishop Carlo Maria Vigano [https://catholicfamilynews.com/blog/2021/07/31/archbishop-vigano-responds-to-the-theft-of-the-mass-of-all-ages-by-pope-francis/#:~:text=We%20have%20come,to%20be%20addressed]

Previous antipapacies... revolved largely around political squabbling and power-plays between aristocratic families, but the people squabbling and jockeying with each other WERE ALL CATHOLICS...

... So please do click over to Dr. Mazza’s page to enroll.  We’ve all been kicked off PayPal in the ideological purge, but Dr. Mazza has alternative payment instructions.  And remember, all class sessions are recorded and available for viewing at any time after the live class session to all paid enrollees, so don’t feel tied to the live class session timing in this busy time of year." [https://www.barnhardt.biz/page/2/]

What is an Antipope? Can you name one?

(Hint: Not all…one is a canonized saint.)

Was there a female “pope”?

Was there a Jewish “pope”?

What makes you a Pope or an Antipope? Can a heretic be a Pope? Can a Pope become a Pope Emeritus?

Join us each Sunday of Advent beginning Nov 28th at 6pm PST.

CLICK HERE TO ENROLL IN DR. MAZZA’S ADVENT MINI-COURSE ON THE ANTIPOPES

Pray an Our Father now for reparation for the sins committed because of Francis's AmorisLaetitia.