Might Taylor Marshall possibly think "the See... [could be] Impeded... Benedict does not accept Bergoglio as Pope so "Peaceful and Universal Acceptance" is Non-existent"? 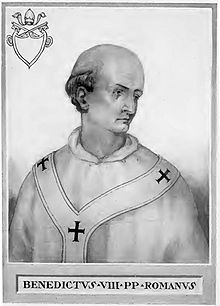 Benedict VIII was opposed by an antipope, Gregory VI, who compelled him to flee Rome.[3] He was restored by King Henry II of Germany, whom he crowned emperor on 14 February 1014. - Wikipedia [https://en.wikipedia.org/wiki/Pope_Benedict_VIII]

I cannot double check Marshall's Twitter account to confirm the above because he has me blocked. But, here is a taste of the probable From Rome post which he may reportedly have tweeted:

However, the concept of an impeded See explains a number of oddities, such as when Ratzinger wrote in “Last Conversations”: “No pope has resigned for a thousand years, and even in the first millennium it was an exception”. Given that six popes abdicated in the first millennium and four in the second, he assimilates himself, as confirmed by the historian Mores (Univ. Milan) to the “exception” of the medieval pope Benedict VIII who, in the first millennium, was sent into exile by an antipope and then had – coincidentally – was restore to his see. It is also significant that the institution of the pope emeritus is now considered non-existent, so much so that – as Il Giornale.reports – the Vatican is working (now) to find a jurisprudential solution. So what has Ratzinger been for eight years? It would explain his white robe, the other papal prerogatives that he continues to enjoy and the strange ambiguity that persists in his statements and interviews, suggesting an inability to communicate clearly, because of the impeded seat.

The suspicion – a very serious one – is that in fact Pope Ratzinger has been communicating subtly through books and interviews for eight years, without anyone picking up his logical messages hidden under apparent inconsistencies. Is it possible that the adamantine and highly cultured theologian, after 2013 has forgotten Latin, canon law, Church history, while continuing to write books and give profound interviews? And that all these distractions always lead to the same scenario of the impeded See?

The latest discovery was made by a journalist from RomaIT, Mirko Ciminiello. Again in “Latest Conversations,” Ratzinger admits that he himself may indeed be the last pope on St. Malachy’s list of pontiffs: he practically does not consider Francis as his legitimate successor.

If Benedict has not abdicated, in fact, the lines of succession are forever separated: one papal and one anti-papal, and if the cardinals do not settle the canonical question about his Declaratio, the true Church will continue in hiding, with a next spiritual leader who is the true successor of Benedict XVI. [https://www.fromrome.info/2021/08/28/tosatti-takes-up-the-discussion-of-benedict-xvis-intention-to-declare-a-impeded-see/]