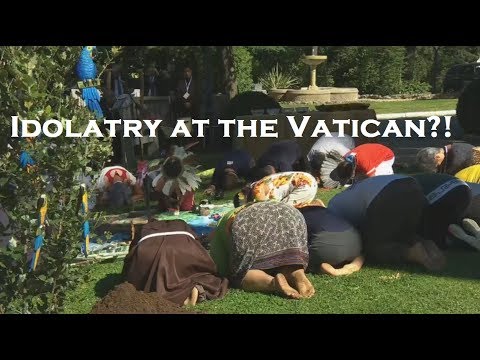 Why did the globalist elite and Francis use youth Greta Thunberg to inspire so-called GREEN YOUTH rallies in the media propaganda spectacular called the "Climate Strike" in over 150 countries just before the COVID media hysteria campaign?

What was the reason that Adolf Hitler inspired HITLER YOUTH rallies and wrote in Mien Kampf:

"Whoever has the youth has the future"?

Why did Francis make a "special invitee" to his Amazon Synod the one-world government advocate Hans Joachim (John) Schellnhuber according to journalist Edward Pentin on Twitter?

Might Francis's main agenda at the Amazon Synod have been not so much about undermining Catholic doctrine despite the Pachamama worship (which has already been greatly accomplished with Amoris Laetitia), but pushing for a one-world government?

Hitler wanted a one-world government so he inspired the Hitler youth and others with the propaganda and scare tactics against the Jews and all the so-called racially inferior useless eaters. Hitler's top propaganda minister Joseph Goebbels said:

"The Führer gave expression to his unshakable conviction that the Reich will be the master of all Europe. We shall yet have to engage in many fights, but these will undoubtedly lead to most wonderful victories. From there on the way to world domination is practically certain. Whoever dominates Europe will thereby assume the leadership of the world." [https://en.wikipedia.org/wiki/New_Order_(Nazism)]

So, now, is it possible that the global elite and Francis apparently want a one-world government and are attempting to inspire green youth and others with propaganda using the big lie scare tactic of the end of the world is near unless the world accepts a "'green dictatorship" one-world government which now includes the new scare tactic that you'll die from COVID unless you take the vaccine.

On August 9, 2019, Francis in an interview with the Vatican Insider showed that he had joined climate extremists in shamelessly exploiting the youth Greta Thunberg for a "regressive green dictatorship" one-world government.

"He praised the increased awareness and movements among young people, such as Greta Thunberg, the Swedish teenager whose #FridaysForFuture campaign asks students to hold a strike to demand swift action on climate change. Francis had met the 16-year-old environmental activist at a weekly general audience in St. Peter’s Square in April."
[https://international.la-croix.com/news/cardinal-blase-cupich-voice-of-the-pope-in-the-united-states/9292]
agnst-nationalism/]
Scientist and doctor Laurent Alexandre according to Climate Changed Dispatch in the article "French Doctor Exposes How Militant Climate Extremists Are Exploiting Greta Thunberg" said "people who follow Greta Thunberg are the useful idiots of the green dictatorship”:

"In a stinging commentary at Le Figaro here, Dr. Laurent Alexandre, surgeon-urologist, a graduate of Sciences Po, HEC and ENA, and co-founder of the Doctissimo website, asserts that teenage Nobel Prize nominee Greta Thunberg is being shamelessly exploited and “is playing into the hands of economic interests."

"Laurent Alexandre first comments that “the young people who follow Greta Thunberg are the useful idiots of the green dictatorship” much in the same way Lenin called left-wing bourgeois “useful idiots of the revolution” and that the failures of all Marxist models have 'left the anti-liberals in turmoil.'”

"He writes that ecology today serves as 'the ideal instrument to propose a new utopia that is a substitute for the Marxist dictatorship'. He adds: 'By exploiting the youth, we are imposing a liberticidal agenda in the name of good feelings.'”

"... Alexandre implies that Greta Thunberg is unwittingly promoting 'the interests of China and Russia' and that her demands would make us “highly dependent on rare metals needed for wind, solar and storage installations, of which China has a near-monopoly.”

"The French urologist and book author describes Ms. Thunberg as 'a shamefully manipulated victim' who needs to be protected, but adds that her radical ideas 'must be attacked relentlessly'”.

"... Finally, Alexandre comments that following the green path will backfire because it would ,aggravate global warming, increase the waste of public money, lead to a regressive green dictatorship and put us at the mercy of China and Russia. All liberal democrats, all Raymond Aron’s heirs, must combat the deadly utopias it conveys.'”
[https://climatechangedispatch.com/doctor-greta-thunberg-climate-extremists/]

Is using the Amazon Synod as a way to push for this "repressive green dictatorship" one-world government the reason Francis made a "special invitee" of Schellnhuber ?

In 2015, LifeSiteNews reported that Francis appears to be in alliance with John Schellnhuber who is calling for a one-world government:

"Pope Francis has appointed controversial German Professor John Schellnhuber as an ordinary member of the Pontifical Academy of Sciences.  Schellnhuber was one of the four presenters of the new encyclical on the environment, Laudato Si’, on Thursday. He is also scheduled to chair a session of a Pontifical Academy for Sciences educational workshop on “Children and Sustainable Development” set for November."

"... Schellnhuber is also known for his advocacy of a one-world government.  In order to avoid his catastrophic predictions for unchecked climate change."

"... Schellnhuber is also a full member of the Club of Rome."

"[T]he Club of Rome in 1972, was one of the starting points for the worldwide attempt to reduce the population by aggressive methods of promoting birth control and the killing of pre-born children."
[https://www.google.com/amp/s/www.lifesitenews.com/mobile/news/whos-that-one-world-climate-guru-who-helped-present-the-popes-encyclical-at]

On May 9, 2019, the New American reported on the "unholy alliance" between the one-world regime globalists and Francis:

Francis said "'When a supranational common good is clearly identified, it is necessary to have a special authority legally and concordantly constituted capable of facilitating its implementation. We think of the great contemporary challenges of climate change, new forms of slavery and peace,' his holiness told those gathered to discuss 'Nation, State, and Nation-State,' the conference theme."

"Pope Francis put a pretty fine point on his message, claiming that planetary problems are exacerbated by 'an excessive demand for sovereignty on the part of States.'"

"... Our only hope for planetary peace and progress is to make room for 'international organizations' to develop into governing bodies, supplanting the 'state interests' with the will of the United Nations, he stated."

"... Those people pushing for unlimited access to abortion loathe the Roman Catholic Church and its centuries-long opposition to the murder of children in utero are the very people standing with the head of that church in the fight to kill sovereignty and establish a one-world government."

"That seemingly bizarre and undeniably unholy alliance should be enough to compel people to question what the underlying goal of the globalists must be."

"In other words, what sort of government would the pope and pro-abortion advocates find mutually commendable?"
[https://www.thenewamerican.com/culture/item/32245-pope-francis-calls-for-end-of-sovereignty-and-establishment-of-global-government]