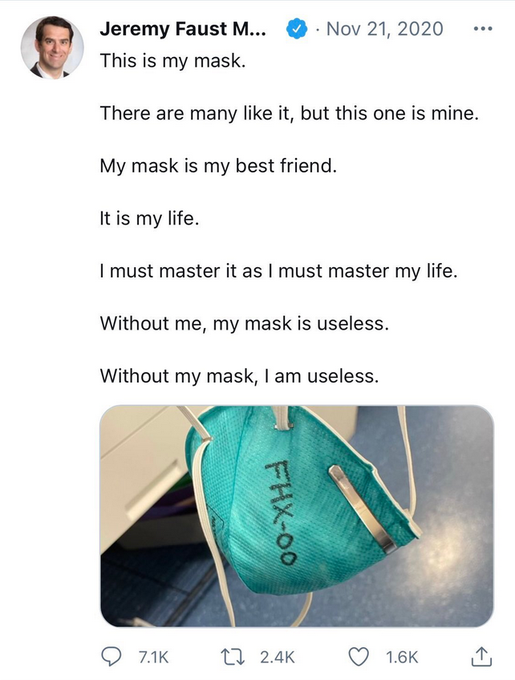 Today, renowned statistician Dr. William Briggs, who is a consultant and adjunct Professor of Statistics at Cornell University with specialties in medicine and philosophy of science, gave a list of the negative effects of the mask and why it's a cult:

Paper by Kai Kisielinski and a slew of others asks “Is a Mask That Covers the Mouth and Nose Free from Undesirable Side Effects in Everyday Use and Free of Potential Hazards?”

Before reading, guess the answer!

Le Abstract (with my added paragraphification):

Many countries introduced the requirement to wear masks in public spaces for containing SARS-CoV-2 making it commonplace in 2020…For a quantitative evaluation, 44 mostly experimental studies were referenced, and for a substantive evaluation, 65 publications were found. The literature revealed relevant adverse effects of masks in numerous disciplines. In this paper, we refer to the psychological and physical deterioration as well as multiple symptoms described because of their consistent, recurrent and uniform presentation from different disciplines as a Mask-Induced Exhaustion Syndrome (MIES).

Even ignoring the wee p-values, the result are obvious. Masks are a cult. Don’t think so? [https://wmbriggs.com/post/35507/]

As the dysfunctional cousin from which it comes, it might be nice to see the original - penned by a Major General for his men fighting the last Great War against the fascists, the eugenicists. Every Marine warrior has been required to memorize it. It is their ethos, just as this pathetic paeon to the filthy mask is the ethos of the enemy.

Each side has its creeds. I love the band of brothers that have kept us free from tyranny ... until now. May their tribe increase. May our enemy’s tribe decrease.