Francis's Vatican Newspaper: "Praising Judas" with a Blasphemous Semi-Porn Picture of "a Naked Jesus Bending over and tenderly Ministering to a Dead Judas" 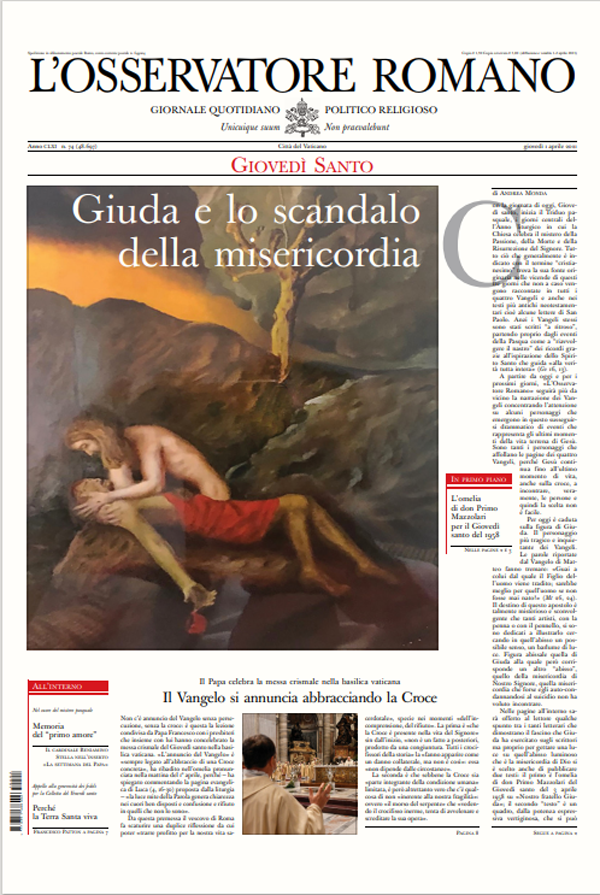 The Catholic website, Tradition in Action, reported that Francis's Vatican newspaper, "L'Osservatore Romano, dedicated the first three pages of its Good Friday edition to praising Judas Iscariot" with a blasphemous semi-porn picture of "a naked Jesus bending over and tenderly ministering to a dead Judas":

The newspaper of the Holy See, L'Osservatore Romano, dedicated the first three pages of its Good Friday edition to praising Judas Iscariot.

In a first page editorial – titled "Judas & the Scandal of Mercy" – Andrea Monda explains that the Vatican organ decided this year to honor the "most tragic and unsettling" figure of the Gospel.

The editor – probably obeying an order of Pope Francis – chose to post on its front page the reproduction of a picture, above and below first row, that presents a naked Jesus bending over and tenderly ministering to a dead Judas.

Monda explains that the author of this painting is a French Catholic who became impressed by Francis' words praising the Traitor in his book When You Pray, Say Our Father... Morsa also reports that Francis loved this painting so much that he has placed it on the wall behind his desk along with another representing Judas...

... In the last several decades, this is the first time – as far as we know – that L'Osservatore Romano has promoted Judas Iscariot on its first three pages. It seems the inauguration of a new saint and the official launching of the "Church of Judas" on a Good Friday, the day of his betrayal...

The defense of Judas has been made in the name of the abyss of God's mercy. So we see that now Divine Mercy, against all the Scriptural evidence, also applies to the most infamous criminal in History.

Are we far from the day when the same mercy will be applied to another Great Traitor, Satan? Does it not appear that the Vatican's semi-official launching of the "Church of Judas" is the prelude to the coming "Church of Satan"? [https://www.traditioninaction.org/RevolutionPhotos/A930-Jud2.htm]

The Francis's Vatican newspaper article and semi-porn picture is "a declaration that is against" Scripture and blasphemous.

The New Advent CATHOLIC ENCYCLOPEDIA explains blasphemy is "a declaration that is against faith":

Blasphemy, by reason of the significance of the words with which it is expressed, may be of three kinds.

The Francis Vatican newspaper appears to be mirroring a similar non-"random" blasphemy of Joe Biden devotee Lady GaGa's semi-porn "Judas" video where she also made "a declaration that is against" Scripture:

Lady GaGa has been criticised by a religious pressure group for her decision to retell the Bible in the video for her upcoming single 'Judas'.

The 'Born This Way' singer has already confirmed that she will portray New Testament figure Mary Magdalene in the as-yet-unreleased promo, which was shot in Los Angeles last weekend.

Speaking to The Sun, Bill Donohue of the Catholic League For Religious and Civil Rights branded GaGa's use of religious icons in the video as a publicity stunt.

He said: "People have real talent, and then there is Lady GaGa. I find GaGa to be increasingly irrelevant.

"Is this the only way to jet up her performance? This isn't random, we are getting closer to Holy Week and Easter."

GaGa's creative director and choreographer Laurieann Gibson previously quelled fears that the 'Judas' video could be deemed blasphemous by insisting that it will convey a "huge and really groundbreaking" message. [https://www.digitalspy.com/music/a313782/gaga-judas-video-slammed-by-christian-group/]