Did the "Arizona Secretary of State... in Charge of Counting the Ballots" have Motive to Commit Voter Fraud?

Joel Fisher posted this Tweet from Katie Hobbs who is "the Arizona Secretary of State... in charge of counting the ballots":

Joel Fischer@JFNYC1
Just in case
@katiehobbs
deletes this message by accident, This is the Arizona Secretary of State. She is in charge of counting the ballots.
"KatieHobbs@katiehobbs... @realDonaldTrump has made it abundantly clear he's more interested in pandering to his neo-nazi base than being @POTUS for all Americans." 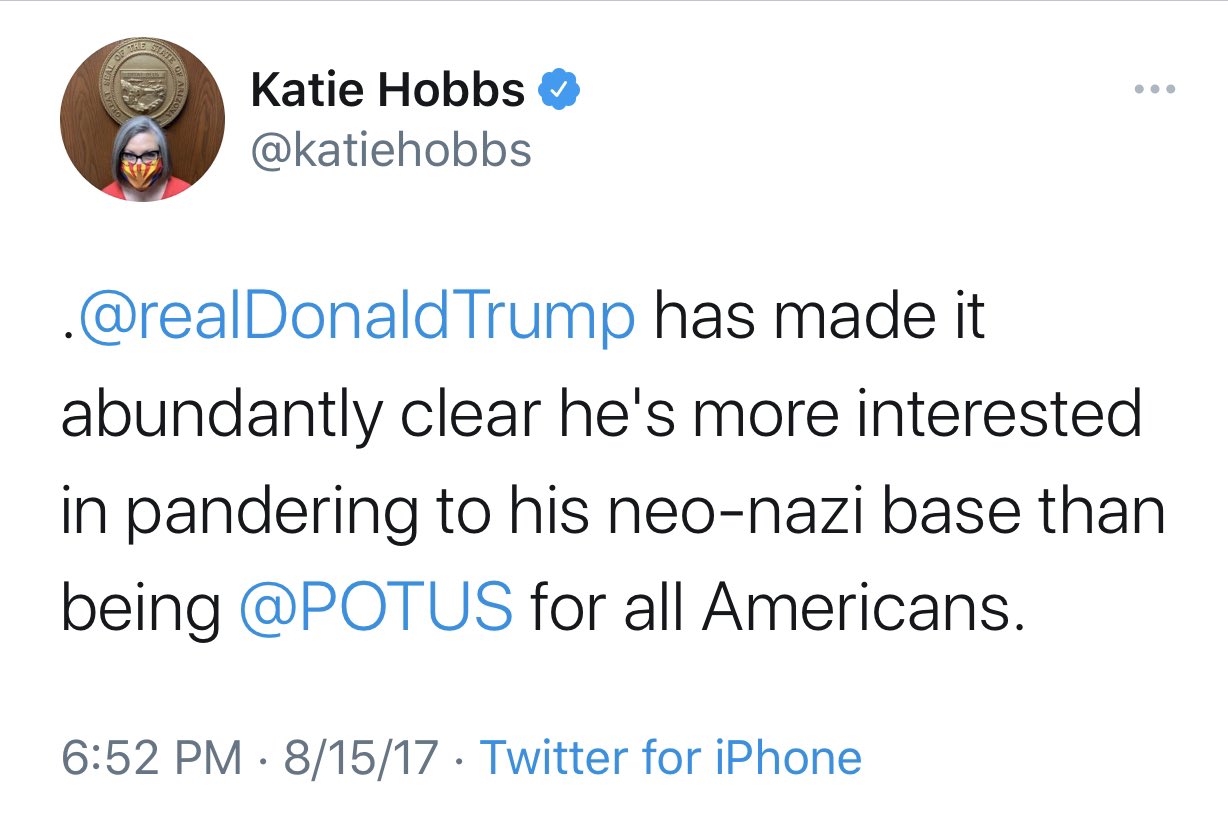 Mark Docherty on his website showed why Hobbs who is "the Arizona Secretary of State... in charge of counting the ballots" had motive to commit voter fraud:

If you were in charge of elections, and you truly believed Trump was literally Hitler, what would you do?...

Would you rig an election to prevent the rise of "neonazis" if you * really * believed you were stopping Hitler?.. https://t.co/Ooft2rVae2. [https://nonvenipacem.com/2020/11/12/if-you-were-in-charge-of-elections-and-you-truly-believed-trump-was-literally-hitler-what-would-you-do/]

Note: A good friend of the Catholic Monitor got this from a group message. She said "exorcist Fr. Chad Ripperger is asking everyone to say this prayer until the election is resolved":

In His Name and by the power of His Cross and Blood, I ask Jesus to bind any evil spirits, forces and powers of the earth, air, fire, or water, of the netherworld and the satanic forces of nature.  By the power of the Holy Spirit and by His authority, I ask Jesus Christ to break any curses, hexes, or spells and send them back to where they came from, if it be His Holy Will.  I beseech Thee Lord Jesus to protect us by pouring Thy Precious Blood on us (my family, etc.), which Thou hast shed for us and I ask Thee to command that any departing spirits leave quietly, without disturbance, and go straight to Thy Cross to dispose of as Thou sees fit.  I ask Thee to bind any demonic interaction, interplay, or communications.  I place N. (Person, place or thing) under the protection of the Blood of Jesus Christ which He shed for us. Amen
Please put your family, the United States of America, President Donald Trump and Archbishop Carlo Maria Vigano as the intentions in the Prayer of Command.