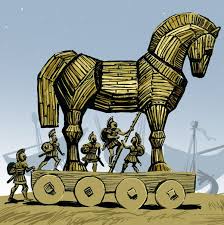 It appears that Amy Coney Barrett may be a neo-liberal Trojan Horse like Justice Neil Gorsuch. It seems she would possibly be semi-pro-abortion.

Voice of America revealed that "Barrett said she would “[f]ollow all [pro-abortion] 'Supreme Court precedent without fail' and would regard decisions such as Roe v. Wade as binding precedent":

"Republicans view her as reliably conservative and a future Supreme Court vote to overturn the landmark 1973 decision legalizing abortion rights in the U.S., but Barrett has offered conflicting comments on how she might vote on abortion cases."

"During her confirmation hearing to the appeals court, Barrett said she would 'follow all Supreme Court precedent without fail' and would regard decisions such as Roe v. Wade as binding precedent.

“I would never impose my own personal convictions upon the law,” she said.

"But she also has written that judges should not be held to upholding Supreme Court precedents, such as the abortion decision." [https://www.voanews.com/usa/three-conservative-female-judges-top-trumps-supreme-court-list]

It appears that Barrett may possibly be a so-called "conservative" Trojan Horse like neo-liberal Gorsuch who betrays conservatives and Christians.

An internationally known attorney, with knowledge of "the DC elite," told the Catholic Monitor by email that the Ruth Bader Ginsburg/Neil Gorsuch Supreme Court ruling for transgenderism and homosexuality, Bostock v. Clayton County, will lead to the legalization  of "child pedophil[a]":

"Child pedophiles will be the next protected SCOTUS class. Trump made a big mistake relying on the DC elite at the “conservative” Federalist Society to screen his SCOTUS candidates"

President Donald Trump and the Republican Party need to take notice that he and his party will own this disastrous ruling and its consequences including, "Child pedophiles [being]...  the next protected SCOTUS class":

"According to Politico, 'the Republican Party seemed generally supportive of both the substance and process by which the Supreme Court extended Civil Rights Act protections to gay, lesbian and transgender workers. President Donald Trump declined to trash the decision, calling it ‘powerful.'" [https://www.lifesitenews.com/news/scotus-writing-transgenderism-into-law-the-roe-v-wade-of-religious-liberty]

If President Trump waffles on this next Supreme Court nominee selection it could destroy him with his conservative Christian base.

The anonymous source said we must vehemently protest:

"We must cry bloody murder to Trump" and let him know he will lose our support and re-election unless he goes against this disastrous ruling and clearly states he will never put in another judge such as neo-liberal Justice Neil Gorsuch into the Supreme Court.

Call and email Trump as well as your elected Republican representatives that this issue will lose them their conservative base unless they clearly state they will never put in another judge such as neo-liberal Justice Gorsuch into the Supreme Court.

chris griffin said…
Thanks for the warning.
3:46 PM

Sandra Elam said…
I just emailed the White House and asked President Trump not to pick Amy Coney Barrett but to pick a reliably pro-life person like Senator Cotton. Thank you for providing the link in your article above.
7:58 PM

Fred Martinez said…
Sandra, Thank you. If everyone who reads this does the same and prays, then our voice may be heard.
8:10 PM

Unknown said…
What Barrett said is what the most strident Pro-life justices must say in order to be confirmed. To impugn her character on the basis of comments carefully crafted to bypass a confirmation process biased against the unborn is naive and alarmist.
8:24 AM

Fred Martinez said…
Look at her record and not at "carefully crafted" propaganda with the purpose of having conservatives and Christians "bypass" looking at her record.
11:19 AM