Trump removed Obama "Demonic Idols," Vigano called for an Exorcism of Coronvirus Satanic Spirit & now the Spirit of Bill Gates may be leaving the White House

"[A] close [anonymous] source to those working in the White House revealed to me that the 'Spiritual Cleansing'... of [a]ll religious artifacts from [the] former [Barack Obama] administration were removed except for 1 cross."


The article reported that Begley on the "Weekend Vigilante" show said the removed Obama religious items "were all kinds of idol gods and images and all kinds of artifacts in there that were demonic."

On January 18, 2016, the Bob Larson website appeared to implicitly confirm this report about Obama having "idol god... artifacts" saying:

"Obama has [the] Hindu god Hanuman in his pocket!... last week... in a series of interviews... reached into his pocket and pulled out... a Buddha, and a miniature idol of Hanuman, the Hindu monkey god! Oh yes, he did have a small rosary give[n] to him by Pope Francis, hardly an offset to the other demonic devices."
(Boblarson.org, "Obama Carries Curses," January 18, 2016)

A spokeswoman for First Lady Melania Trump while not denying the removal of Obama religious artifacts said that no exorcism in the White House happened.
(Associated Press, "First Lady did not hire exorcist for White House," February 10, 2018)

Moreover, last Month, Archbishop Carlo Maria Vigano called for an "exorcism" of the spirit of the coronavirus according to Newsweek:

"Carlo Maria Vigano, an Italian archbishop of the Catholic Church who once served as the Vatican's diplomatic representative to the U.S., has called on his fellow clergy to perform a 'mass exorcism' on Holy Saturday, the day before Easter Sunday, in order to quell Satan's 'frenzy' during the coronavirus pandemic."

"Vigano, who has opposed the shutting down of church services to slow the spread of the virus, wrote in a public letter, 'In these modern times of terrible tribulation, when the pandemic has deprived Catholics of Holy Mass and the Sacraments, the Evil One has gone into a frenzy and multiplied his attacks to tempt souls into sin.'"

"As such, he is asking Catholic clergy to help conduct a mass exorcism against Satan and the Apostate Angels at 3 p.m. on Saturday 'so we can all fight together the common enemy of the whole human race.'"

"He chose Saturday because ,Holy Saturday is the day when we remember Our Lord Jesus Christ as He descended into Hell to free the souls of the Fathers from Satan's chains,' he wrote."  Slideshow

Maybe President Trump needs to do a another "spiritual cleansing" of the White House to remove the spirit of Bill Gates and his operative Anthony Fauci as The Remnant editor Michael Matt implied: 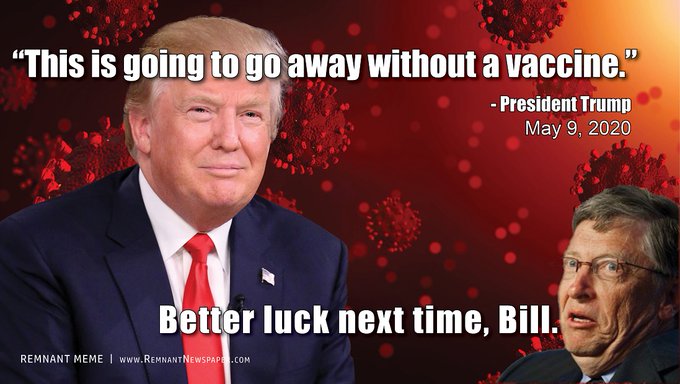 Aqua said…
Arbp Vigano sure sounds like a Pope to me.