Instead of Nazi-like Gun Control Marches & Rallies, Public Schools need to be Reformed or Outlawed to Stop School Shootings 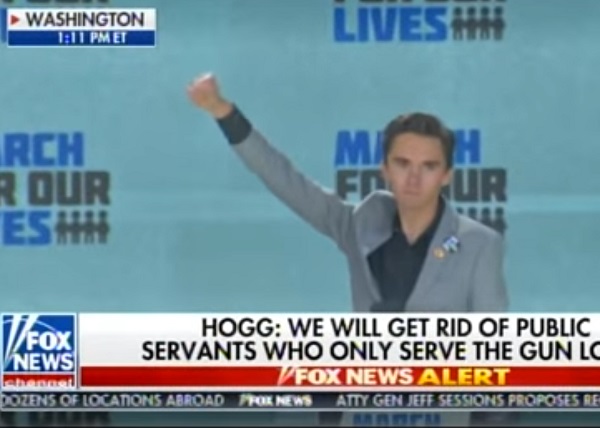 "With the 'March for our Lives' rally fresh in the minds of hundreds of thousands of gun control supporters who took to U.S. streets in protest this weekend, the leader of the Catholic Church [Pope Francis] has called on young people not let themselves be silenced." [http://www.newsweek.com/pope-francis-after-march-our-lives-church-leader-wants-youth-keep-shouting-859735]

Fr. Z, also, noted the "coincidence" between the march and "a document [that] was released from the Pre-Synodal Meeting of Young People in Rome" on the same day:

"On the same day that in Washington DC there is a "march" staged by talking-point saturated young people about – call it what it is – undermining the 2nd Amendment rather than upholding it, a document was released from the Pre-Synodal Meeting of Young People in Rome... The coincidence of the march and the document struck me, on the eve of Palm Sunday.  Pueri hebraeorum… a few days later turn into a mob that chooses Barabbas.  I’m not necessarily making a connection, of course... Reasoned discourse and facts have been pitched in sacrifice to the volcano god of teen emotions." [http://wdtprs.com/blog/2018/03/of-dc-gun-marches-young-people-synods-and-volcano-sacrifices/]

Natural News editor Mike Adams saw in this "volcano god of teen emotions" a parallel with the “Hitler Youth” rallies:

"The 'Hitler Youth' invasion of Washington D.C. took place today as young fascists-in-training were corralled into the nation’s capitol to demand that government authoritarians strip away the civil liberties of all law-abiding Americans in the name of 'gun control.'"

"Just like Hitler Youth enthusiasts, these fascists-in-training are told they’re “saving lives” for “a better future,” and that the only thing standing in their way is a bunch of violent gun owners who want to murder every baby in sight. (The irony of all these left-wingers actually condoning the abortion murder of babies, of course, is completely missed in all this.)"

"What none of these children are being told, of course, is that Hitler took away gun rights from the Jews before exterminating six million of them in the Holocaust. It’s so much easier to commit genocide, Hitler discovered, when the people you’re tying to murder can’t fight back. Echoing the madness of the Third Reich, the propagandist-in-chief of today’s lunatic Left anti-gun movement is David Hogg, a profanity-laced, foulmouthed student who is seething with anger and seems forever on the verge of outright calling for all gun owners to be exterminated by the government." [https://www.naturalnews.com/2018-03-24-hitler-youth-student-gun-control-march-invades-washington-follows-in-the-footsteps-of-nazis-who-disarmed-the-jews-before-the-holocaust.html]

Pope Francis and the Media, if they really want to stop school shootings, instead of apparently attempting to coordinate youth against the Second Amendment, should be teaching the Ten Commandments which are outlawed in public schools.


If they really want to stop shootings, they need to realize that public schools more than guns need to be reformed or outlawed.

We need to remember that market researcher, C. Britt Beemer, thought that the Columbine shooting had changed our country's mindset. His surveys show 70% of parents now think danger in schools will continue to increase. “Informed parents” are, also, dissatisfied with public school's drugs, peer pressure, and poor teaching. He sees a trend towards single income families and home schooling.

John Taylor Gatto — former New York City and State Teacher of the Year — documents how the education system purposely has created a mass of illiterates. His book, The Underground History of American Education, demonstrates that in 1840 — before public education — 93% to 100% of poor and rich had “complex literacy.”

Justice Department records show that violent criminals are overwhelmingly (80%) illiterate. Since WWII, as illiteracy increased, so did crime. Out-of-wedlock births quadrupled and in the 60's “bizarre violence … became common.”

Why the “dumbing down”? Gatto documents that throwing money at education is a waste unless certain instituted changes are reversed. The first “well-documented” change that gave rise to illiteracy was the American schools' massive conversion to “non-phonetic ways of teaching reading.”

Then, in the 1960's, schools began replacing morality and discipline with reinforcement schedules. There was no longer right or wrong, only the sterile, therapeutic concepts of “positive and negative reinforcement” to maintain the “social order.” It doesn’t take a rocket scientist to figure out why in the 60's “bizarre violence… became common.”

And teachers that were true educators, like Jaime Estalante of Stand and Deliver fame, and teachers-of-the-year like John Gatto were weeded out. Look it up on the Internet — they were both forced out. We all can remember two or three good teachers like Estalante and Gatto, but they were the exceptions, not the rule.

If it is true — as Gatto with overwhelming evidence shows in his book — that the educational system purposely has created a mass of illiterates, and if Justice Department statistics are true that violent criminals are overwhelmingly (80%) illiterate, then the education system is increasingly unsafe at any price for teens.

As Fr. Z said of these teens:

"Reasoned discourse and facts have been pitched in sacrifice to the volcano god of teen emotions."

If the teens used their minds they would realize:

Before the 1960's there were no school shootings.

Not gun laws, but:

In the 1960's, schools began replacing morality and discipline with reinforcement schedules. There was no longer right or wrong, only the sterile, therapeutic concepts of “positive and negative reinforcement” to maintain the “social order.” It doesn’t take a rocket scientist to figure out why in the 60's “bizarre violence… became common.”

Has anyone ever heard of school shootings at private or religious schools and at home school homes?

Public Schools need to be reformed or outlawed to stop school shootings more than outlawing guns.

Public schools being reformed or outlawed would not only save the physical life of youths, but the eternal life of all youths who are forced to go to institutions that outlaw the Ten Commandments.

Where the Ten Commandments are outlawed then might makes right as it did in Nazi Germany which means all the gun control laws, school security guards and metal detectors in the world will not make the youths safe. 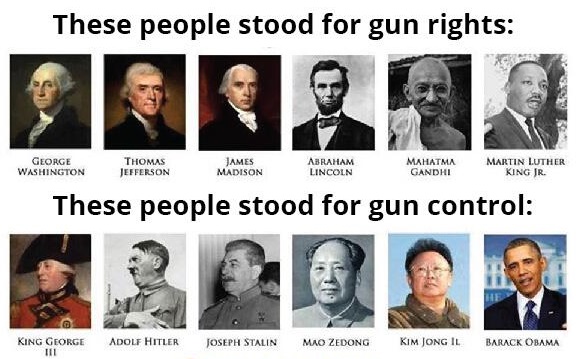 Lauren Hogg, the younger sister of David Hogg and surprisingly not verified on Twitter, has created special armbands for gun control advocates to wear to school, the March For Our Lives demonstration, and anywhere else you think you can wear it and not get embarrassed. The band, of course, is to be worn on your arm, and the symbol in the middle resembles a peace sign. But does it really?
If the Hogg armband for gun control looks familiar, it should: 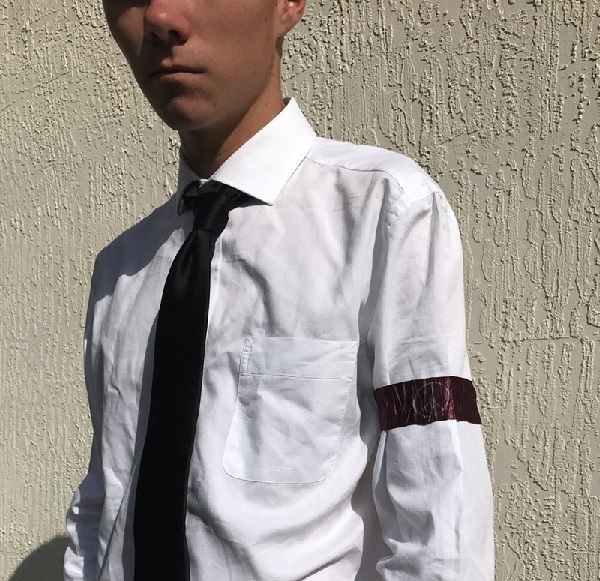 Many people don’t remember this, but the Nazi symbol (swastika) also began as a peace symbol, but was of course twisted by Adolf Hitler into a symbol of tyranny and genocide. Many of today’s anti-gun Leftists are openly promoting a rainbow variation of the Swastika as a “symbol of peace:” 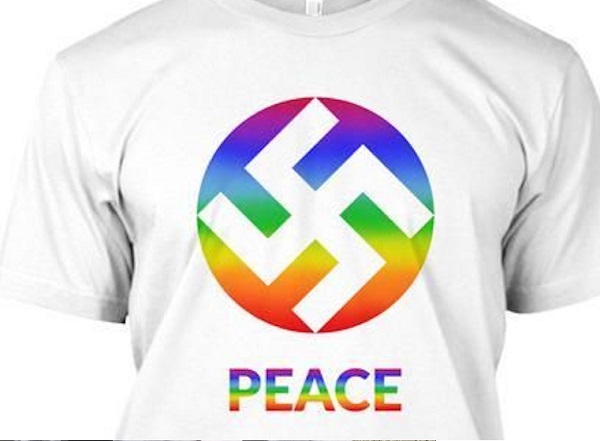 In today’s rally, David Hogg became a full-fledged propaganda politician-in-training, reading from an obviously scripted speech, full of flowery words and high ideals that covered over his real goal: The complete disarmament of all law-abiding Americans.
Hogg is actually calling for a “revolution” against gun owners, reports ABC News. [https://www.naturalnews.com/2018-03-24-hitler-youth-student-gun-control-march-invades-washington-follows-in-the-footsteps-of-nazis-who-disarmed-the-jews-before-the-holocaust.html]

Pray a Our Father now for our youth.

February 03, 2022
Doctor of the Church St. Francis de Sales totally confirmed beyond any doubt the possibility of a heretical pope and what must be done by the Church in such a situation: "[T]he Pope... WHEN he is EXPLICITLY a heretic , he falls ipso facto from his dignity and out of the Church, and the Church MUST either deprive him , or, as some say, declare him deprived, of his Apostolic See." (The Catholic Controversy, by St. Francis de Sales, Pages 305-306) Taylor Marshall finally admitted that "Pope Francis teaches HERESY: Pope Pius XII condemned the heresy of Francis": Pope Francis on Feb 2 2022, taught, "that in Christ no one can ever truly separate us from those we love because the bond is an existential bond, a strong bond that is in our very nature...who have denied the faith, who are apostates." Pope Pius XII taught the exact opposite when he wrote of those: "who have not been so unfortunate as to separate themselves from the unity of the Body, or b
23 comments
Read more