Flashback: "My Friend said the Atmosphere at CM [Church Militant] was 'Weird,' with Disturbing Sexual Undertones" 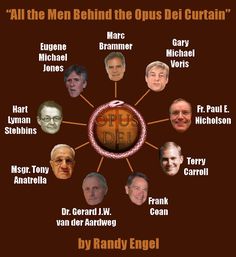 "But my friend said the atmosphere at CM was 'weird,' with disturbing sexual undertones and ended up in counseling for post traumatic stress after leaving. Is my friend any less of a credible witness than Hannah, a major contributor to the claims made by Jassy Jacas against the SSPX?" - Mary Ann Kreitzer

Mary Ann Kreitzer, the President of the Les Femmes-The Truth website, gave the Catholic Monitor permission to repost their great piece titled "Church Militant and their Crusade against the SSPX":

The negative reactions to Susan's post, Snow White and Priest Charming - A Modern Tale of Female Vindictiveness, are starting to appear in the combox moderation list. I haven't decided which ones, if any, I'm willing to post. Certainly not the one using the F-word and calling Susan a bitch.