Flashback: Is Bishop Barron in the "Conservative" Wing of the Bernardin/Gregory Gay Mafia? 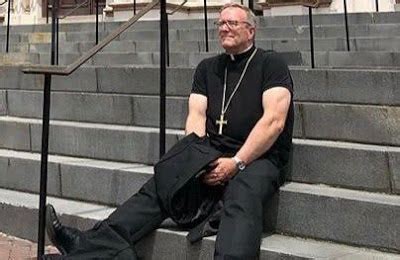 The May 13, 2018 Catholic Standard reported that the so-called conservative, who is a "friend" of gay activist Fr. James Martin, Bishop Robert Barron has been closely associated with homosexuals who apparently are and were part the gay bishops network.
(Twitter, Fr. James Martin, April 30, 2012, Martin: "Here is my friend Fr. Robert Barron")

Barron's "first spiritual director when he was a seminarian for the [Bernardin] Archdiocese of Chicago" and "friend" was the reportedly homosexual and gay activist Wilton Gregory.

The Standard, also, says he was ordained by the reportedly homosexual and gay activist Cardinal Joseph Bernardin. The article shows Barron giddy in praise of the two gay activists:

"'Cardinal Bernardin's qualities... have shaped the ministry of Archbishop Gregory'... Barron said that his friend Archbishop Gregory is a excellent choice to lead Archdiocese of Washington. 'I can't think of anyone better'... in the wake of the abuse crisis, he said."
(Catholic Standard, "Friends remember how Archbishop Gregory's Chicago years shaped his ministry," May 13, 2019)

Barron, however, doesn't disclose in his praise of Gregory and Bernardin that they were apparently part of "a network of gay priests and bishops" in Chicago according to whistleblowers.

Nor does he explain how a gay activist archbishop is a "excellent choice" to stop gay predators who are responsible for almost all the priest sex abuse cases.

Here is the evidence:

It is well-known that Gregory has a deep-seated gay agenda who according to a LifeSiteNews report on August 14, 2018 has appointed a " pro-gay priest as a 'spiritual guide' for abuse victims" despite the fact that the 2011 John Jay report found 81 percent of abuse victims were male.

"Joseph Kellenyi... once a seminarian at Mundelein in the Chicago area... Says:... '[Cardinal Joseph] Bernardin fostered and promoted a network of gay priests and bishops... they protected each other, covered up each other's 'mistakes,'... Bishop Gregory is well aware that he is where he is today because a gay Cardinal [Bernardin] took a special interest in him at a young age. Bishop Gregory benefited directly from a combination of homosexuality and power in the Church.'"
(BryanHehirExposed.wordpress.com, "Fr. Bryan Hehir, Bishop Kicanas, and Cardinal Bernardin," 8 years ago)

It is a scandal that Francis according to whistleblower Sipe has appointed a "homosexual" bishop to Washington, D.C. and that Barron praised his choice.

The scandal gets worst when it is well-known that the Francis appointed bishop has a gay agenda and gay lobby history when 81 percent of abuse victims were males abused by gay predator priests.

Bizarrely and circumstantially in his gay agenda episcopal behavior, Gregory is exhibiting a behavior that Francis is known to practice.

Francis is known to promote homosexual perverts such as Theodore McCarrick to positions of higher responsibility.

The latest example is his personal friend Archbishop Gustavo Zanchetta who was promoted to a high Vatican position even though according to Argentinean Church documents he is allegedly a gay pervert.

Gregory has acted like Francis in at least one of his promotions. The one example that is explicitly known is when Gregory's priest "Fr. Juan Areiza, got entangled in a gay scandal exposed by CBS Atlanta." This same gay pervert priest was later promoted to be "pastor of St. Pius... by Wilton Gregory."
(The American Spectator, "FrancisChurch goes from  Scandal to Scandal," November 4, 2018)

It would be laughable if it was wasn't scandalous that Barron claims that gay activist Gregory and Francis, who is a promoter of gay perverts as well as gay activists, can or might do anything to end the "network of gay priests and bishops."

Read the Barron quote and weep as you laugh at its ridiculousness:

"I would suggest... the Holy Father [Francis]... form a team [probably with Gregory on the team]... to determine how Archbishop McCarrick managed... to function as a roving ambassador for the [Francis] Church and to have disproportionate influence on the appointment of bishops [even though Francis knew he was a homosexual predator]."
(Word on Fire, "The McCarrick Mess, August 9, 2018)

The question needs to be asked:

Is Bishop Barron an enabler in the "conservative" wing of the Bernardin/Gregory gay mafia?


Pray an Our Father now for reparation for the sins committed because of Francis's Amoris Laetitia.