Will Biden's "Crack-Pot Academic Theor[y]...“Modern Monetary Theory” make "currency... worthless enough that people used it actually as toilet paper" like in the " Weimar Republic of the 1930s[,]" Venezuela and Zimbabwe? 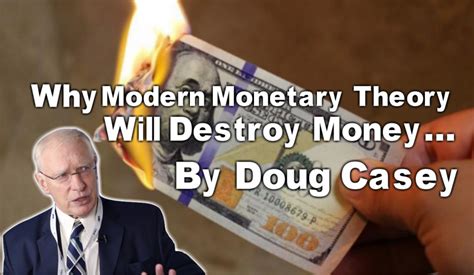 Why Modern Monetary Theory Will Destroy Money - Rethinking the Dollarrethinkingthedollar.com

Victor Davis Hanson, who is a professor emeritus of classics at California State University, a senior fellow in classics and military history at Stanford University, a fellow of Hillsdale College, reported that Joe Biden's administration is crazy about the "crack-pot academic theor[y]...'modern monetary theory'... [which] dominate[s] policymaking in the Biden administration”:

The greatest risk of Modern Monetary Theory for American citizens is that runway inflation will decimate the value of your nest egg. Or, alternatively, that the ever-higher taxes needed to curb that inflation will eat into your nest egg just the same.

... Venezuela and Zimbabwe are examples of countries that tested the limits of exorbitant spending funded by printing money. Predictably, in both cases each country experienced runway inflation that indeed sapped the wealth of its citizens. When private wealth became worthless, so too did the value of their tax revenues, which in turn killed the spending plans. The resulting bread lines and destitution are testament to the inevitable failure of this approach. [https://www.capitalfrontiers.com/single-post/2021/01/13/what-is-modern-monetary-theory-heres-a-primer-on-the-biden-administrations-new-progressiv]

In March, The Catholic Monitor quoted what an economist said this could do to a country:

Economist and statistician John Williams sure doesn’t. Williams, who has consulted for individuals and Fortune 500 companies, now uncovers the truth behind the U.S. government’s economic numbers on his Web site at ShadowStats.com. Williams says, over the last several decades, the feds have been infusing their data with optimistic biases to make the economy seem far rosier than it really is. His site reruns the numbers using the original methodology. What he found was not good...

... What kind of hyperinflation are we talking about?

I am talking something like you saw with the Weimar Republic of the 1930s. There the currency became worthless enough that people used it actually as toilet paper or wallpaper. You could go to a fine restaurant and have an expensive dinner and order an expensive bottle of wine. The next morning that empty bottle of wine is worth more as scrap glass than it had been the night before filled with expensive wine.

We just saw an extreme example in Zimbabwe. … Probably the most extreme hyperinflation that anyone has ever seen. At the same time, you still had a functioning, albeit troubled, Zimbabwe economy. How could that be? They had a workable backup system of a black market in U.S. dollars. We don’t have a backup system of anything. Our system, with its heavy dependence on electronic currency, in a hyperinflation would not do well. It would probably cease to function very quickly. You could have disruptions in supply chains to food stores. The economy would devolve into something like a barter system until they came up with a replacement global currency. [https://www.thecatholicmonitor.com/2022/03/it-seems-that-there-is-deliberate-plan.html]

T said…
They are destroying the old system because they already have a new system in mind. They will replace paper money with central bank digital currency, which will require secure authentication, so they will create a single digital ID, that will act as passport, driver’s license, vaccine passport, food passport (when everyone is dependent on rations), social media ID. It will probably be stored in a chip or digital tattoo, that you carry everywhere.
10:18 PM