Ferrara's Facade: Why should the problem of Francis's legitimacy be brushed aside with "Ignore him"? If there are indications that a priest is abusing minors, would Chris Ferrara shake his head and shrug, "Ignore him"? 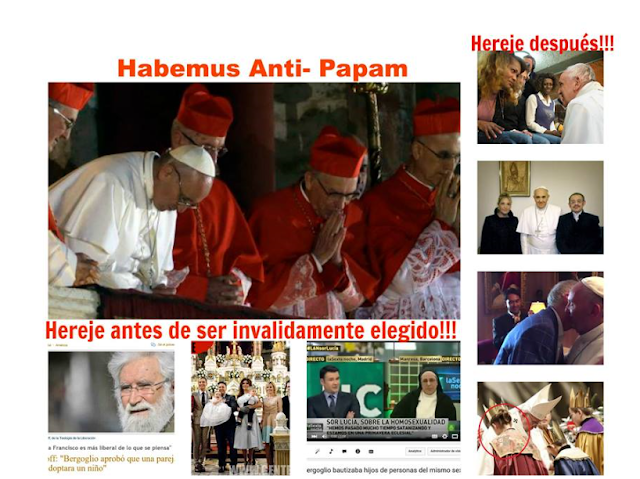 Aqua said…
... Ferrara’s advice represents those who take the easy way out - see no evil, hear no evil, speak no evil. Plug your ears, cover your eyes and pretend all is well.

Anonymous said…
In what way are they profiting from the dogma that Francis is pope? Ignoring the side that is saying “what heresy?” which side leads more to apostasy from Roman Catholicism, the side that that acclaims his heresies, blasphemies and anti Catholic behavior and insists that Bergoglio is not the pope or the side that acclaims the exact same things and insists he is the pope. By hiding the possible third option, people who know the faith are led into choosing either sedevacantism or leaving the Catholic Church in toto.

I wonder how they profit from it because a rational person understands people in their position will be judged more harshly if they are wrong, and the fact that they have no logical answers to some things that they (the traditional Catholic media cult) pontificate on should make them tremble. I once was led to sedevacantism because of the dogma that Francis is definitely pope. Something is preventing their mind from realizing they may be scandalizing more than they are saving souls from hell. Is it money, prestige, power? [https://www.thecatholicmonitor.com/2022/02/did-lifesitenews-admit-that-benedicts.html]

In a recent video with Brian McCall, Chris Ferrara was discussing the problem of Bergoglio's February 2 comments contradicting yet another teaching of the Catholic Faith. Ferrara's advice? "Ignore him." Where in canon law is such an approach advocated, let alone required? Ferrara is too sharp not to know this. Instead of advocating for appropriate ecclesial sanctions to be determined and imposed--up to and not excluding declaring that Bergoglio was never the Pope in the first place or has lost the office--Ferrara invents a CYA dodge of his own and tries to pass it off as orthodox--even Marian--Catholicism.

Could Counselor Ferrara please explain--based on objective criteria rather than his own subjective preferences--why the problem of Bergoglian legitimacy should consciously be brushed aside? If there are indications that a priest is abusing minors, would Chris Ferrara shake his head and shrug, "Ignore him"? If Joe Biden assaults fundamental human and Constitutional liberties, does Chris Ferrara find "Ignore him" to be an adequate response? Yet where the putative Pope is concerned, this ludicrously illogical standard is held to apply.

Could Chris Ferrara, on behalf of all those who wish too stop short of facing the truth not in general but egregiously in this sole regard, kindly explain?

Note: This is written by a friend of The Catholic Monitor

Anonymous said…
Someone should raise funds for Benedict. He told us so many years ago he dressed like a pope because he had nothing else to wear and 9 years since his retirement he still dresses like a pope. That means his wardrobe is empty.

Also, his caretaker is failing to take proper care of him. Instead of gently remind him he’s no longer pope, his caretaker lets him delude himself into acting like a pope, such as signing correspondence with his papal name. This is almost elderly abuse.

We need to raise money for him because the cheapskates around him refuse to help an old man, ex-pope no less.
9:59 PM