Disney Demons | Satan Is My Superhero ...

Surprisingly, despite Disney's liberal use of demons and satanic imagery it is the company's attitude to the LGBTQ+ community that has raised the most ire. - [https://podcasts.apple.com/us/podcast/disney-demons/id1534464226?i=1000504627628]

Satan is my Superhero Podcast
@JudasFalling666
A show for atheists, scoffers, heathens and unbelievers. A fun fact feast of music and comedy sketches, poking fun at conspiracy theories and superstitions. [https://twitter.com/judasfalling666]

Our enemies are not even the media of the culture of death, not even... Disney or Time-Warner... 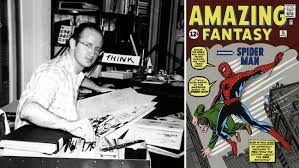 Steve Ditko, the original artist and co-creator of the Spider-Man comic said:

"Aristotle said that art is more important than history. History tells how man did act. Art shows how man should and could act. It creates a model."

"The self-flawed and anti-hero provide the heroic label without the need to act better. A crooked cop, a flawed cop, is not a valid model of a good law enforcer," Ditko said in the program. "An anti-cop corrupts the legal good, and an anti-hero corrupts the moral good."

Michael O' Brien in "A Landscape with Dragons: The Battle for Your Child's Mind" said that the imagination traditional Catholic literature is the way that mankind comprehends "God's territory" and his created "invisible realities."

The modern imagination, according to O'Brien, has lost "God's territory" by returning to its "pre-pagan split in consciousness," which is the Gnostic rejection of the "sacramental" unity of spirit and matter, the addiction to occult tales of will to power like Harry Potter, and the relativistic denial of good and evil with ends-justify-the means story lines.

J.R.R. Tolkien's epic fairy tale "The Lord of the Rings" is for O'Brien a prime example of a return to the Western Christian epic tradition of the moral imagination, which comprehends "God's territory" and his created "invisible realities."

O'Brien said, "The discernment of the right paths that must be taken, if good is to triumph, is dramatized in the myriad geographical, emotional, spiritual, and symbolic choices faced by the questers. In each of these, Tolkein's world is faithful to the moral order of the universe, to the absolute necessity of freedom. Middle-earth is a "sacramental" world, an "incarnational" world. ... Spirit [invisible realities] and matter are never portrayed as adversaries."

The Epoch Times showed that fairy tale heroes are important in the "real struggle between good and evil":

Let’s consider the Brothers Grimm version of “Cinderella.” Unlike the Disney cartoon, Cinderella’s dying mother enjoins her to “be good and pious.” Her sisters “were beautiful and fair in appearance, but at heart were black and ugly.” As the story progresses, we see a real struggle between good and evil. (At the end of the original tale, two pigeons pluck out the wicked stepsisters’ eyes. Fairy tales can be violent.)

Not only do fairy tales illustrate the canyon between good and evil, but they also show children that evil can be overcome, that good can win out in the end. When I watch my small grandchildren wave their sword sticks at imaginary enemies, and I ask them to identify their opponents, they always reply, “The bad guys.”

Later, when they are older, they will be able to parse moral ambiguity, but first, they must learn the basic distinction between the “good guys” and the “bad guys.”

A quote attributed to G.K. Chesterton—he put down the idea, but not in these words—offers this wisdom: “Fairy tales do not tell children that dragons exist. Children already know that dragons exist. Fairy tales tell children the dragons can be killed.” When Jack kills the giant by hacking down the beanstalk, when the Gretel shoves the witch into the oven, when the Red Cross Knight dispatches the dragon, children see good triumphing over evil. [https://www.theepochtimes.com/once-upon-a-time-the-importance-of-fairy-tales-for-children_3242298.html]