Nazi Kapos?: If Amoris Laetitia Trad Heretics want to "Divorced... the Doctrine of the Church" from the TLM then "Why Fight for it, then?" 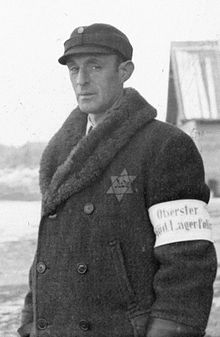 A kapo or prisoner functionary (German: Funktionshäftling) was a prisoner in a Nazi camp who was assigned by the SS guards to supervise forced labor or carry out administrative tasks... After World War II, the term was reused as an insult; according to The Jewish Chronicle, it is "the worst insult a Jew can give another Jew".[2] [https://en.wikipedia.org/wiki/Kapo]

A reader of the Catholic Monitor texted the following to us today about many apparent Kapo Trads:

Why does it takes a Protestant to post a good comment about this in the Francis apologist Catholic World Report's propaganda article?

Just about all the Catholics commended the author.  So now the TLM is a sport we should take seriously (analogy from the article), completely divorced from the doctrine of the Church?  Why fight for it, then? "ANGELO

James R. A. Merrick, Ph.D.,Evangelical Lutheran:
I feel bad for you guys. Obviously Pope Francis HATES the Latin Mass and the traditionalist movement devoted orthodox members like you and your family as an obstacle for his modernist agenda. Wake up and smell the coffee. Please face reality."
https://www.catholicworldreport.com/2021/07/18/a-fathers-plea-to-the-holy-father-reinstate-summorum-pontificum/#:~:text=ANGELO,Please%20face%20reality.
It takes a Protestant to post a good comment about this. Just about all the Catholics commended the author. So now the TLM is a sport we should take seriously (analogy from the article), completely divorced from the doctrine of the Church?  Why fight for it, then?
"We have not experienced the divisiveness and disdain that troubles the Holy Father, though we are certainly aware of it. One recent homily warned parishioners against listening to voices like Taylor Marshall and certain news sites that promote distrust of the Magisterium. The parishioners we know seek only to be devout and deeply rooted in the riches of the Catholic Faith. They don’t dissent from Vatican II. Many still attend the New Mass on weekdays."
https://www.catholicworldreport.com/2021/07/18/a-fathers-plea-to-the-holy-father-reinstate-summorum-pontificum/#:~:text=We%20have%20not,Mass%20on%20weekdays.
Stop for a moment of silence, ask Jesus Christ what He want you to do now and next. In this silence remember God, Father, Son and Holy Ghost - Three Divine Persons yet One God, has an ordered universe where you can know truth and falsehood as well as never forget that He wants you to have eternal happiness with Him as his son or daughter by grace. Make this a practice. By doing this you are doing more good than reading anything here or anywhere else on the Internet.