Director of National Intelligence: "China Interfered with the 2020 Election and CIA Management Pressured Analysts Not to Report It" 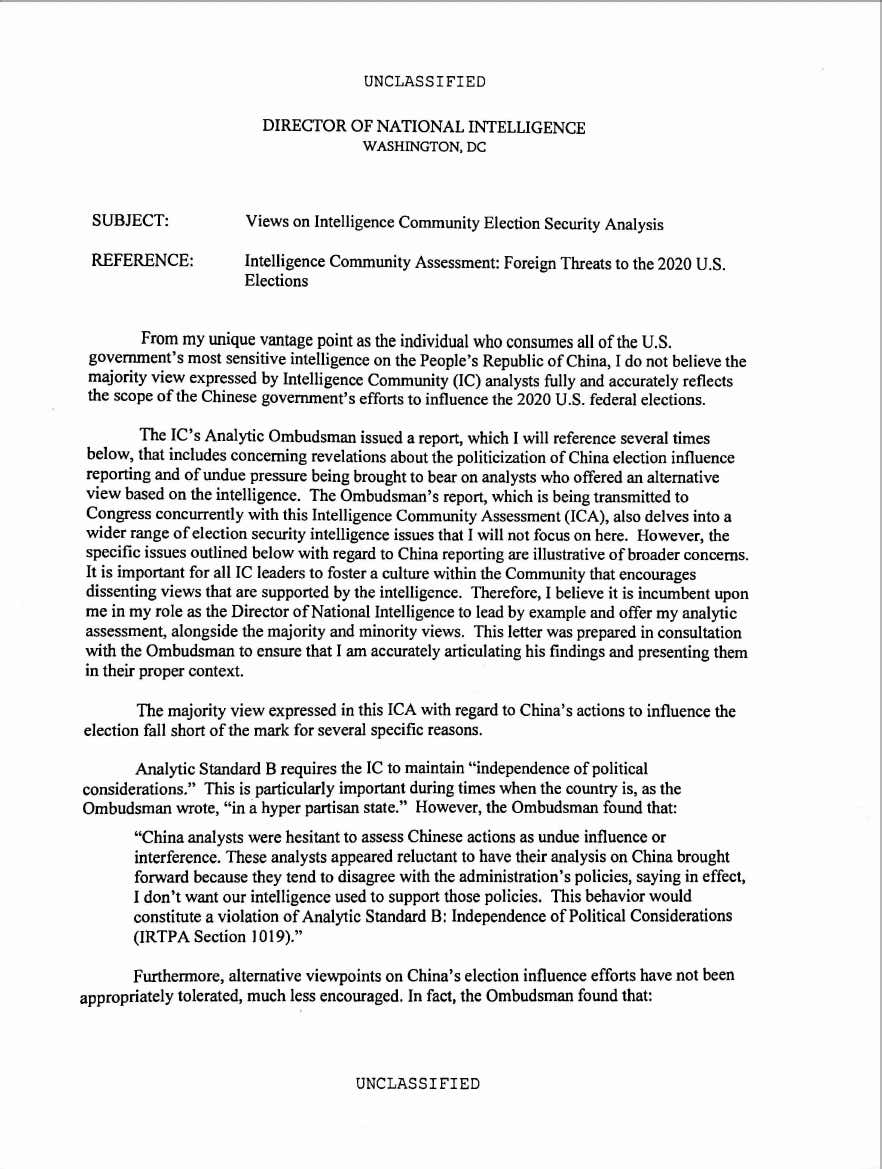 More dot connecting is making it more and more obvious that China interfered in the the massively fraudulent 2020 presidential election.

The Catholic Monitor, The Epoch Times, Gateway Pundit and many other news outlets have provided overwhelming evidence showing voter fraud, China’s deep connections to the Joe Biden family and the above intelligence report apparently may present more evidence of the Chinese intervention in the election. [Intel Cryptanalyst-Mathematician on Biden Steal: "212Million Registered Voters & 66.2% Voting,140.344 M Voted...Trump got 74 M, that leaves only 66.344 M for Biden: http://catholicmonitor.blogspot.com/2020/12/intel-cryptanalyst-mathematician-on.html?m=1 and The Five Most Obvious Acts of Fraud in the 2020 Election that You Are No Longer Allowed to Discuss: https://www.thegatewaypundit.com/2021/01/five-obvious-acts-fraud-2020-election/]

Director of National Intelligence (DNI) John Ratcliffe assessed that Chinainterfered in the 2020 federal elections, according to a letter transmitted to Congress.

In the letter (pdf), Ratcliffe alleges that intelligence about China’s election interference was suppressed by management at the CIA, which pressured analysts to withdraw their support for the view.

Citing a report by the Intelligence Community Analytic Ombudsman Barry Zulauf, the director of national intelligence said some analysts were reluctant to describe China’s actions as election interference because they disagreed with the policies of President Donald Trump.

The Washington Examiner published Ratcliffe’s letter and the ombudsman report on Jan. 17, ten days after publishing an original report on the documents. The ODNI did not respond to requests from The Epoch Times to authenticate the documents.

“Based on all available sources of intelligence, with definitions consistently applied, and reached independent of political considerations or undue pressure—that the People’s Republic of China sought to influence the 2020 U.S. federal elections,” Ratcliffe wrote… [https://www.thegatewaypundit.com/2021/01/breaking-dni-ratcliffe-releases-report-showing-china-interfered-2020-election-cia-management-pressured-analysts-not-report/]

Note: What is needed right now to save America from those who would destroy our God given rights is to pray at home or in church and if called to even go to outdoor prayer rallies in every town and city across the United States for God to pour out His grace on our country to save us from those who would use a Reichstag Fire-like incident to destroy our civil liberties. [Is the DC Capitol Incident Comparable to the Nazi Reichstag Fire Incident where the German People Lost their Civil Liberties?: http://catholicmonitor.blogspot.com/2021/01/is-dc-capital-incident-comparable-to.html?m=1 and Epoch Times Show Crossroads on Capitol Incident: "Anitfa 'Agent Provocateurs'":

Note: Please put the America and President Donald Trump in the following Prayer of Command intention against the "satanic forces" unleashed against them: