Update- Candace Owens: "My Hope is that all [DC] Violent Agitators are Arrested... is there.. still ANTIFA Thugs in the Mix" 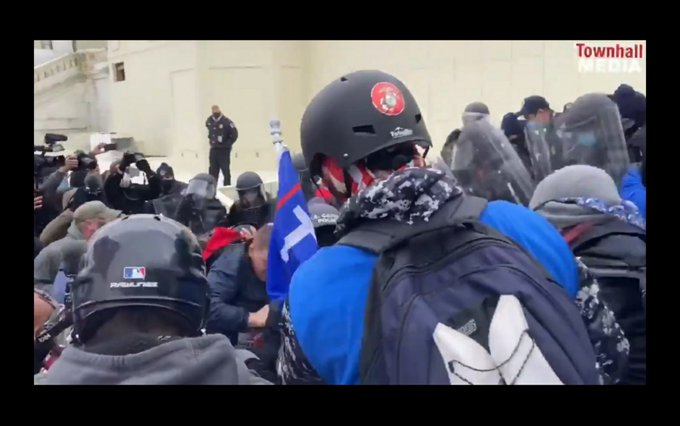 In His Name and by the power of His Cross and Blood, I ask Jesus to bind any evil spirits, forces and powers of the earth, air, fire, or water, of the netherworld and the satanic forces of nature.  By the power of the Holy Spirit and by His authority, I ask Jesus Christ to break any curses, hexes, or spells and send them back to where they came from, if it be His Holy Will.  I beseech Thee Lord Jesus to protect us by pouring Thy Precious Blood on us (my family, etc.), which Thou hast shed for us and I ask Thee to command that any departing spirits leave quietly, without disturbance, and go straight to Thy Cross to dispose of as Thou sees fit.  I ask Thee to bind any demonic interaction, interplay, or communications.  I place N. (Person, place or thing) under the protection of the Blood of Jesus Christ which He shed for us. Amen
Note: Intel Cryptanalyst-Mathematician on Biden Steal: "212Million Registered Voters & 66.2% Voting,140.344 M Voted...Trump got 74 M, that leaves only 66.344 M for Biden" [http://catholicmonitor.blogspot.com/2020/12/intel-cryptanalyst-mathematician-on.html?m=1]
Voter fraud attorney Sidney Powell's renowned statistician, Dr. William Briggs stated that the "conservative" SCOTUS Justices did a Pontius Pilate by "cuck[ing]. There is no other word for it. Their entire argument for rejecting the suit brought Texas and joined by almost half the States was Nyah nyah nyah!" [https://wmbriggs.com/post/33854/]
Will Kavanaugh, Barrett and Gorsuch in the upcoming "Kraken"case cowardly run away from it as they did with the Texas case and be accomplices in the United States becoming the next totalitarian impoverished Chinese Communist satellite like Venezuela by not joining the fight for truth and justice against the massive voter fraud that is attempting to destroy America?
(Will US be Venezuela?: Ex-CIA Official told Epoch Times "Chávez started to Focus on [Smartmatic] Voting Machines to Ensure Victory as early as 2003": http://catholicmonitor.blogspot.com/2020/12/will-us-be-venezuela-ex-cia-official.html)
(Tucker Carlson's Conservatism Inc. Biden Steal Betrayal is explained by “One of the Greatest Columns ever Written" according to Rush: http://catholicmonitor.blogspot.com/2021/01/tucker-carlsons-conservatism-inc-biden.html?m=1)
The famed Bishop Rene Gracida answered the above question, which Kavanaugh, Barrett and Gorsuch must answer to God now and at the the hour of their death, saying America is in a battle for its very survival as a, free and independent, God fearing nation: