Famed Bishop Gracida: The Trump Voter Fraud Battle "is Comparable" to the "Civil War" and "Washington's Battles against the British" 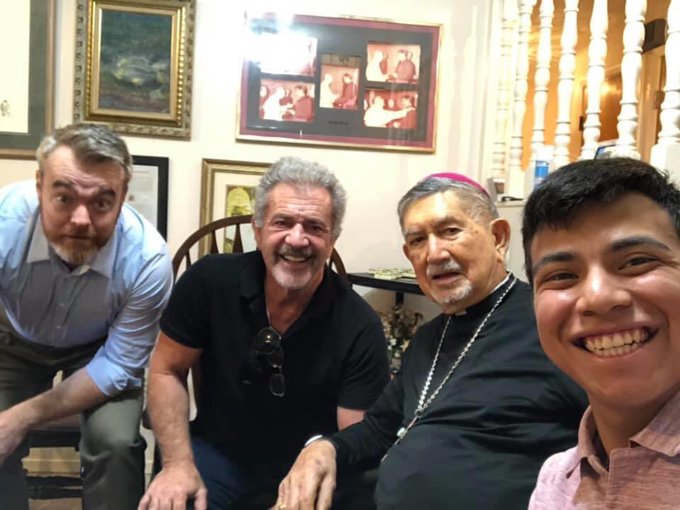 The Passion of  the Christ movie director Mel Gibson visits with Bishop Rene Gracida on June 24, 2020

Today, famed Bishop Rene Gracida said that America is in a battle for its very survival as a free and independent nation:

Gracida is declaring that America is in a battle between good and evil. He is asking all patriotic and loyal Americans to pray for President Donald Trump and our country to overcome this demonic assault by saying this prayer taken from Bishop Gracida’s website Abyssus Abyssum Invocat:

A Prayer for Deliverance Of President Donald Trump from Enemies

Based on A Psalm of David.

Contend, O Lord, with those who contend with President Donald Trump;

Take hold of shield and buckler,

and rise for his help!

Draw the spear and javelin

Say to his soul,

“I am your deliverance!”

Let them be put to shame and dishonor

who seek after his life!

Let them be turned back and confounded

who devise evil against him!

with the angel of the Lord driving them on!

Let their way be dark and slippery,

with the angel of the Lord pursuing them!

For without cause they hid their net for him;

without cause they dug a pit[a] for his life.

Let ruin come upon them unawares!

And let the net which they hid ensnare them;

let them fall therein to ruin!

Then his soul shall rejoice in the Lord,

exulting in his deliverance.

All his bones shall say,

thou who delivers the weak

from those who are too strong for him,

the weak and needy from him who despoils him?”

they accuse him of things that he knows not.

They requite him evil for good.

But at his stumbling they gathered in glee,

they gathered together against him;

cripples whom he knew not

slandered him without ceasing;

they impiously mocked more and more,[c]

gnashing at him with their teeth.

How long, O Lord, wilt thou look on?

Rescue him from the ravages

Then I will thank thee in the great congregation;

in the mighty throng I will praise thee.

Let not those rejoice over him

who are wrongfully his foes,

and let not those wink the eye

who hate him without cause.

For they do not speak peace,

but against those who are quiet in the land

they conceive words of deceit.

They open wide their mouths against him;

our eyes have seen it!”

Thou hast seen, O Lord; be not silent!

O Lord, be not far from him!

Bestir thyself, and awake for his right,

for his cause, my God and my Lord!

Vindicate him, O Lord, my God, according to thy righteousness;

and let them not rejoice over him!

Let them not say to themselves,

“Aha, we have our heart’s desire!”

Let them not say, “We have swallowed him up.”

Let them be put to shame and confusion altogether

who rejoice at his calamity!

Let them be clothed with shame and dishonor

who magnify themselves against him!

Let those who desire his vindication

shout for joy and be glad,

“Great is the Lord,

who delights in the welfare of his servant!”

Then my tongue shall tell of thy righteousness

and of thy praise all the day long.

Important Note: The publisher of the Catholic Monitor has made a pledge to say the Sorrowful Mysteries of the Rosary everyday for a Rosary Lepanto-like victory for President Trump. He asks all CM readers to make this pledge.

Note: Please put your family, the United States of America, President Donald Trump and the Trump legal team as the intentions in the following Prayer of Command:

In His Name and by the power of His Cross and Blood, I ask Jesus to bind any evil spirits, forces and powers of the earth, air, fire, or water, of the netherworld and the satanic forces of nature.  By the power of the Holy Spirit and by His authority, I ask Jesus Christ to break any curses, hexes, or spells and send them back to where they came from, if it be His Holy Will.  I beseech Thee Lord Jesus to protect us by pouring Thy Precious Blood on us (my family, etc.), which Thou hast shed for us and I ask Thee to command that any departing spirits leave quietly, without disturbance, and go straight to Thy Cross to dispose of as Thou sees fit.  I ask Thee to bind any demonic interaction, interplay, or communications.  I place N. (Person, place or thing) under the protection of the Blood of Jesus Christ which He shed for us. Amen