Is Our Lady of Guadalupe a Jewish Woman or a Native American Woman? 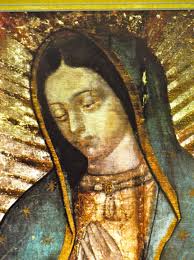 The gentleman you worked with at AFC [Apostolate for Family Consecration] indicated that her [Our Lady of Guadalupe image (OLG)] dress and appearance are more appropriate to the Jewish maiden. Wanted to see if there is further documentation on this. Most scholarly works these days do not take this point and so, agreeably, it is difficult to maintain the position without little support. Unless you take GK's text as maxim and law that the majority has rarely, if ever, been in the right.

Have you heard of Dr. Charles Wahlig, the nuclear physicist, who studied the image of OLG as well as the reflection of the images in her eyes of Juan Diego and others. In a 1980's Apostolate for Family Consecration (AFC) video, which I appeared on, Wahlig said that someone had painted OLG a darker complexion such as a Mexican Native American would have over the original image.

According to the physicist on examining the image closely OLG had a somewhat lighter complexion like a Jewish woman of the time of Jesus Christ would have. Wahlig also said in the video that a famous Latino singer ( I believe his name was Jose Cenda) who became a monk went to Palestine in the 1950's and found out that the clothes OLG was wearing were those of a Jewish woman. You can get the video from Apostolate for Family Consecration. It is called "Immaculate Conception-Patroness of the USA."

I checked the Internet and there is nothing for or against what Wahlig said. If any scholars have any new information on this please send it to me. Most people who write on these subjects just parrot what other have said.

Pray an Our Father now for the restoration of the Mass and the Church as well as for the Triumph of the Kingdom of the Sacred Heart of the Jesus and the Immaculate Heart of the Mary.