Jesse Romero: You ain't Catholic unless you "Vote for Trump" 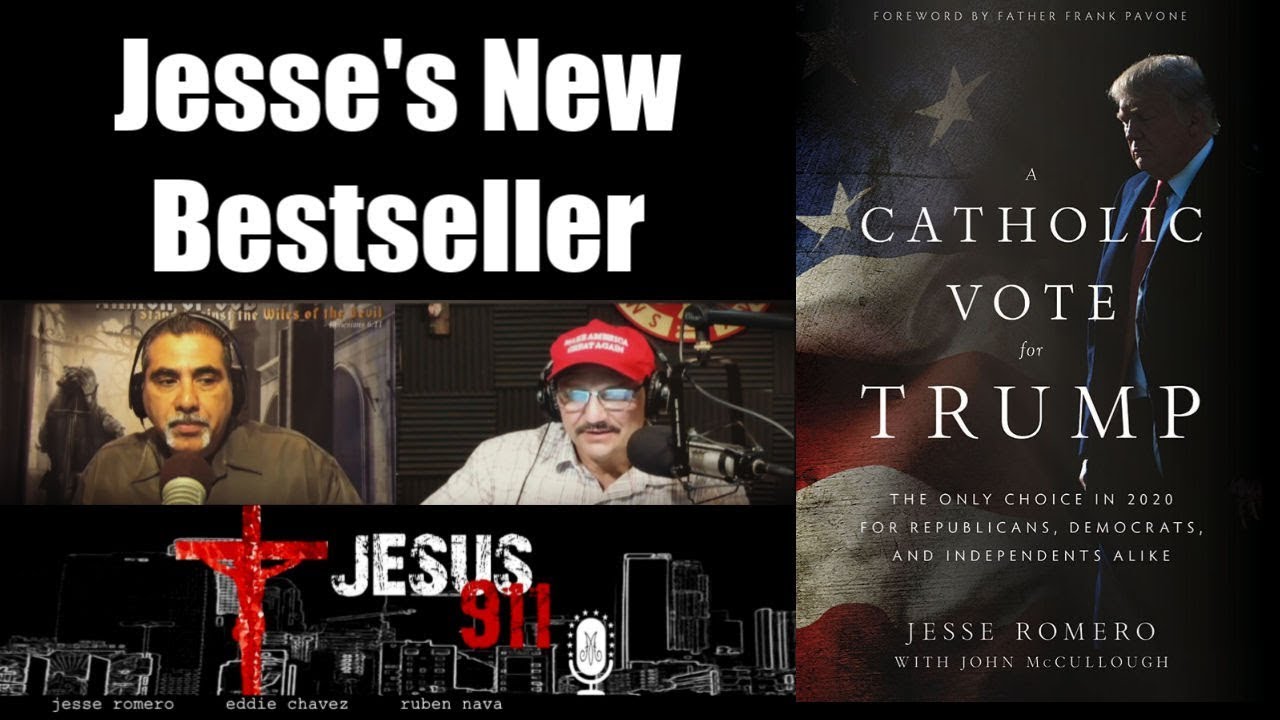 My eyes opened wide when conservative Catholic pundit Jesse Romero emailed me his phone number so we'd talk about the traditionalist Catholic Monitor doing a post on his new book "A Catholic Vote for Trump."

I like going to daily Mass so at the conservative Catholic church I go to for weekday Masses we are told anyone who wants to receive Holy Communion on the tongue must wait until all the Novus Ordo people recieve on the hand, first. I joked once, "We're the back of the bus people, now" as they finally let us, Trads, get in line.

As a former writer for the San Francisco Faith and a one time pro-life activist with some national connections I've met some Catholic media personalities who were a bit different from their media persona.

I discovered Jesse's media persona to be who he really is.

After talking to Romero for about an hour I found we were both having some deep chuckles and talking as if we came from the same neighborhood.

Both of us grew up in tough Latino neighbors with the knowledge of what it feels like to hear bullets wheezing by our heads.

He gave the hard hitting Catholic Monitor the great compliment of saying it is the Mike Tyson of blogs.

Jesse, who appears to be moving towards traditionalism, is a good and brave man for first reaching out to this Trad in his crusade to re-elect President Donald Trump and attempting the Michael Matt Uniting of the Clans with conservatives Catholics and traditionalists Catholics to save the United States from the party of death Democrats.

His 228 page book is an easy to read Mike Tyson knock out punch to convince the sincere, but poorly catechised Catholics who get their news from "the left-wing propaganda... Spanish-language [and English-language] media and are led by the nose... a classic case of the blind leading blind as Our Lord stated (cf. My.b15:14)."
(Catholic Vote for Trump, Page 126)

These sincere poorly catechised Catholics are overly trusting of the media and liberal churchmen including bishops who apparently want them to vote for the pro-abortion Democrats.

Romero and his co-writer John McCullough reasonably explain to them why pro-life and pro-family "non-radical Catholic Democrats," "Independents" and "Hispanic Democrats" must "Vote for Trump."

The book can be summed up as:

You ain't Catholic unless you "Vote for Trump."

We'll end with one last quote from the book that is needed now when the liberals in the Church and media are trying to divide our country using Marxist revolution racist narratives to attempt to destroy the United States:

"I don't look at the world through race bifocals. I look at life with the heart of a Catholic Christian. We are saved by grace not by race. To paraphrase Nazi concentration camp prisoner and survivor Victor Frankl, from his book Man's Search for Meaning, "There are only two races, decent men and indecent men."
(A Catholic Vote for Trump, Pages 128-129)

Voice of My Ancestors said…
Mr. Martinez, I do radio and video interviews with Br. Alexis Bugnolo, and now starting up a 24/7 internet radio for Ordo Militaris Radio TV, would you like to do radio? Br. Alexis told me to ask in your comment box. Check out our goals on what we want to do. https://www.ordo-militaris.net/2020/06/15/building-a-great-radio-station-group-of-hosts/
11:47 AM

Ask Br. Alexis for my email address. Email me your phone number and we can talk.