May 28, 2016
Not only are Pope Francis's teachings condemned by Pope John Paul II, but they are anathema by the Council of Trent.

Amoris Laetitia and Francis's letter which approves the Argentine norms as the only interpretation of that papal document is teaching false doctrine and condemned by the Council of Trent.

It was reported that after the papal letter Argentine Bishop Macin cited it as the order of the Pope to give Communion to 30 it appears unrepentant adulterous couples since no mention was made of them living as bother and sister.

Again, Francis's teachings are not only directly counter to the encyclical of John Paul II, but condemned by the Council of Trent.

Also, according to leading Catholic theologians including Dr. E. Christian Brugger, the Council of Trent appears to give this teachings of Pope Francis, and his intimate friend who wrote important parts of the document, an anathema.

On May 25, the Catholic Herald said new "revelations suggest that some of Amoris’s most contentious paragraphs – relating to “situations of sin” and “mitigating factors” – had their origin in Archbishop Fernández’s articles, which gave a critique of John Paul II’s encyclical Veritatis Splendor."

The evidence shows that the Pope’s intimate friend and ghostwriter Archbishop Víctor Manuel Fernandez did a "cut and paste" from his ten year old anti-John Paul II tracts which made up some of the most controversial parts of the papal document according to a May 25 article of The Spectator.

Francis's friend, The Spectator said, is seen as "a joke figure" in terms of his reputation as a theologian who wrote a silly book called “Heal me with your mouth. The art of kissing.”

The Vatican expert in the article showed how intimate a friend then Archbishop Bergoglio and the future pope was to his protege:

"Partly on account of those two articles, the congregation for Catholic education blocked the candidacy of Fernández as rector of the Universidad Católica Argentina, only to have to give in later, in 2009, to then-archbishop of Buenos Aires Jorge Mario Bergoglio, who fought tooth and nail to clear the way for the promotion of his protege."

The Catholic Herald quoted a passage from Fernandez's situational ethics articles which were "consciously echoed" in Amoris Laetitia’s paragraph 301:

“A subject may know full well the rule, yet have great difficulty in understanding ‘its inherent values’, or be in a concrete situation which does not allow him or her to act differently and decide otherwise without further sin.”

This passage according to the Catholic Herald may be directly counter to defined Catholic doctrine:

"This paragraph of the exhortation has been criticised by theologians including E. Christian Brugger, who argued that it apparently goes against Church teaching: 'This seems to contradict the defined doctrine in Trent on Justification, canon 18: 'If any one says the commandments of God are impossible to keep, even by a person who is justified and constituted in grace: let him be anathema.'”

First Things, in "Francis's Argentine Letter And The Proper Response " by Elliott Milco, says the exact same thing about Francis's letter which endorses the Argentine norms.

"The Church teaches and has always taught, from St. Paul to the Council of Trent and beyond, that grace strengthens and liberates us from the bonds of sin, and that while we may never, in the present life, be perfectly free from the inclination to do wrong, it is possible through grace to keep the commandments. This doctrine was given force of law in Trent's decree on justification: 'If anyone says that the commandments of God are, even for one that is justified and constituted in grace, impossible to observe, let him be anathema.'The same decree explains that 'God does not command impossibilities, but by commanding admonishes you to do what you can and to pray for what you cannot, and aids you that you may be able.'"

"The real problem with the Argentine norms is their deviation from this larger and more fundamental principle: that grace truly sanctifies and liberates, and that baptized Christians are always free to fulfill the moral law, even when they fail to do so. Jesus Christ holds us to this standard in the Gospel. It is presumptuous of Francis—however benign his intentions—to decide that his version of 'mercy' trumps that given by God himself."

Brugger and Milco are not speaking about the Kasper proposal, but the Catholic doctrine of infused grace which was denied by Martin Luther and the other "reformers"

On that other issue, Fr. Raymond de Sousa's article "What Argentina's 'Amoris Laetitia' Guidelines Really Mean" in the National Catholic Register tries to make the case that the Kasper proposal in it's totality actually suffered a lose despite media hype claiming otherwise and despite Francis's efforts to implement the total proposal.

De Sousa tries to makes the case that the Argentine norms is not mistaken because it could be treated in pre-Amoris Laetitia "standard principles of moral theology and confessional practice, analogous to the the moral culpability of contraception when the spouses do not agree."

On this separate issue from the topic of grace, Brugger in the Catholic World Report with the article "The Catholic Conscience, the Argentine Bishops, and "Amoris Laetitia" destroys the De Sousa attempt to justify the Argentine norms by using Pope John Paul II's Veritatis Splendor that shows it creates a "destructive dichotomy, that which separates faith from morality."

He demonstrates that the only solution to the problematic Argentine norms is to form consciences not create loopholes so persons can sin in invincible ignorance.

Be that as it may, the point is that the Kasper proposal isn't the issue here, but Amoris Laetitia and the Argentine norms apparent denial of a defined doctrine of the Council of Trent on grace which the "reformers" denied.

The "reformers" idea of imputed grace saw man as "totally depraved" and corrupt who even after justification was not infused with grace and truly changed on the inside.

Luther's image of imputed grace was that of man as a pile of dung covered with snow.

As Milco said Trent's doctrine on infused grace says "that graces truly sanctifies and liberates, and that baptized Christians are always free to fulfill the moral law, even when they fail to do so."

It is a very big and scary moment in Church history if the above and following is true:

Moral Theologian Dr. E. Christian Brugger, on April 22, wrote Amoris Leatitia (A.L.) in 301 is "inconsistent with the teaching of Trent on grace."

Brugger then writes that it appears that Canon 18 of Trent, which is infallible doctrine, gives an anathema to Pope Francis's 301 teaching on grace.

Milco says that Francis is not just directly countering Trent's infallible doctrine, but Jesus Christ when he writes:

"It is presumptuous of Francis—however benign his intentions—to decide that his version of 'mercy' trumps that given by God himself."

A published writer friend of mine who has studied Thomas Aquinas told me:

"A.L. has in fact done something much more serious: It denied the entire concept of what it means to possess Catholic charity, sanctifying grace, and justification. If this isn't seen and loudly and forcefully condemned, all the rest will follow, just as it did in Lurtherism and all of Protestantism."

To put it mildly, if the above is true then A.L. 301 and the letter which endorses the Argentine norms are the greatest material errors ever written by a Pope or in the case of Amoris Laetitia a Pope and his ghostwriter.

The material error of Pope John XII of the Middle Ages will be considered a minor footnote next to Pope Francis's 301 and letter which endorses the Argentine norms if America's most influential journal of religion and public life, First Things' Deputy Editor Milco, Dr. Brugger, and my friend are right. 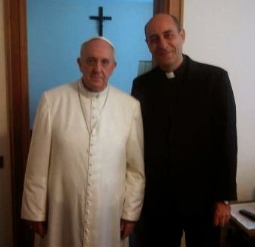 thewarourtime.com said…
This comment has been removed by a blog administrator.
2:04 PM