Dr Mazza: "People are leaving the Church already, & going into schism because they think Francis is Pope... & teaching things that are not Catholic" 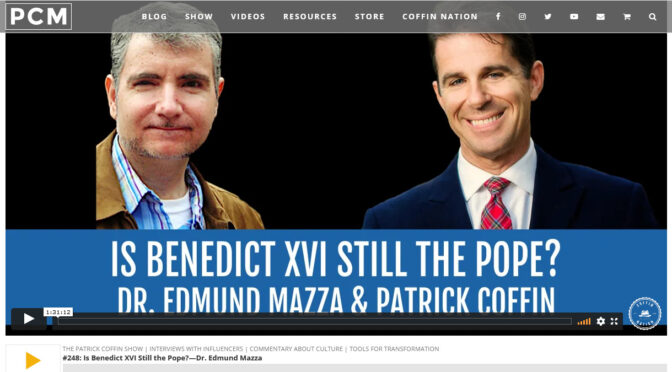 Historian Dr. Edmund Mazza said "people are leaving the Church already, and going into schism because they think Francis is Pope. Because they think that he’s a monster Pope, that’s destroying the church and teaching things that are not Catholic":

Yeah, I agree in full. Francis has twice in my mental accounting, alluded to the possibility of his own resignation. And now there’s rumors swirling that there’ll be some kind of meeting in November with the cardinals, after which he will publicly resign. That’s the rumor. Often in the Roman sphere, Rome’s fuel is almost rumors, right? That’s the wind beneath its PR wings, is rumor. But many of the previous rumors about the disastrous Synod on the family, those rumors turned out to be true.

The rumor that Pachamama would be enthroned, that turned out to be true. The rumor that the Argentine bishops in their “Attaboy, double thumbs up” letter in response to the question of whether or not divorced and remarried Catholics, that did not have a decree of nullity, could receive Holy Communion. That wasn’t only approved by Francis, but elevated into the AAS, the Acta Apostolicae Sedis, which is a kind of vault of official magisterial teaching. That’s a big neon flashing problem to me. That, that error can be enthroned into what we’ve traditionally seen as official Catholic teaching. This is why thoughts like ours this conversation, your research have arisen.

I’ll tell you Patrick, I tried to get my article on this published by a prominent editor in a prominent Catholic journal whose names I will not name. But I got an email back telling me that people who are thinking along these lines are leading people out of the church, and he didn’t use the word “schism,” but that was the implication. And so I just want to clear that up.

And first, I’ll say two things. The first one is that I think people are leaving the Church already, and going into schism because they think Francis is Pope. Because they think that he’s a monster Pope, that’s destroying the Church and teaching things that are not Catholic. That all religions, that God wills, all religions, for example, as in the Abu Dhabi declaration, which on the face of it is heresy.

I’ll give you an example who I think is the poster boy of this, Sean Hannity, Right? From Fox News, the conservative commentator, He left the Catholic faith. I think it’s probably the catalyst that pushed him over the edge was having a Marxist Pope; thinking that Francesco is running the show here.

So I would differ. I talk sometimes with Ann Barhardt, she says her inbox is flooded with people who thank her for looking into this subject, because it’s keeping them in the church rather than encouraging them to leave the church.

And the second thing that I would want to say is that technically, if you look at the statements of the different saints and scholars on the subject, just because you suspect the Pope might not be the Pope, doesn’t put you into a schism. [https://www.thecatholicmonitor.com/2021/10/part-4-of-exclusive-transcription-is.html]