Spiritual Warfare: St. Paul Illustrated that by Loving Jesus Christ with our Mind, Heart, Will & Suffering that we Win more "Souls for Heaven than if [we] had Spend a Hundred Years Preaching the Gospel" 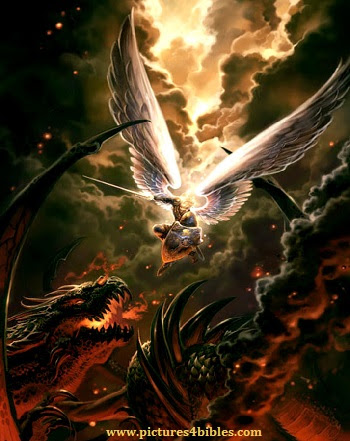 Catholic author William Thomas Walsh in his 1943 book "Saint Teresa of Avila" showed how there is a need for Catholics to engage in spiritual warfare by offer their "sufferings in union with those of Christ on the cross, [which] takes on something of the unearthly beauty, peace, and sublimity of... [our] Master:

"About this time her [St. Teresa] duties brought her into contact with one of the older nuns who was dying of the most painful and disgusting disorder: as the result of oppilations, she had in her belly open wounds, though which emerged whatever she ate. Some of the nuns seemed afraid of the poor woman's malady; but what impressed Teresa was her remarkable patience. the nun was one of those mystics who so penetrated the paradoxical secret of suffering at the heart of Christianity that she could endure all the pain and humiliation, not merely with resignation, but with a positive joy which no one can understand without witnessing it, as it recurs in convents generation after generation."

"The face of such a person, offering her sufferings in union with those of Christ on the cross, takes on something of the unearthly beauty, peace, and sublimity of her Master. And so it seemed to Teresa that what she saw in that Christlike face was worth any price that might be paid for it in terms of human inconvenience. It must be paid for, however, and the price was pain. From the heart of that magnanimous heart of the novice, vital and alert in the bloom of her youth, there leaped a prayer, a prayer that was incomprehensible even to Christians who have not penetrated the center of their Faith; she asked God to give her a similar patience, with whatever sickness might be necessary to achieve it." (Pages 49-50)

Catholic author Mary Fabyan Windeatt in her 1949 book "Saint Paul the Apostle" explained how St. Paul after his near death stoning at Iconium illustrated that by loving Jesus Christ with our mind, heart, will and suffering that we win more "souls for Heaven than if [we] had spend a hundred years preaching the Gospel":

"He'll never be well," Timothy told himself. The Jews from Icomium have ruined everything."

But when several weeks had passed, Paul rallied suddenly. Staggering, he rose from his bed and insisted on going out for a walk. and before an hour had passed he had a convert!

"I don't understand!" cried Timothy, when Paul told him about it. 'How did you do it when you didn't even preach a word?"

Paul looked thoughtfully at his young friend. "By suffering," he said, smiling.

"Yes. Didn't I tell you once before that God can use our weakness best of all?"

"I have been thinking a great deal about Stephen."

"The young man who at Jerusalem?"

"Yes. Only not of that death so much as the one that Stephen died before.The real death."

"I mean that when Stephen gave up his own will, he won more souls for Heaven than if he had spend a hundred years preaching the Gospel!"

"But I can hardly believe that!"

"It's true. The Lord doesn't need our words and actions, but he does want our love - our hearts and wills. When we have given Him these, we have given everything. We have died on the Cross just as He did, and won the greatest blessings for a sinful world." (Pages 64-65)