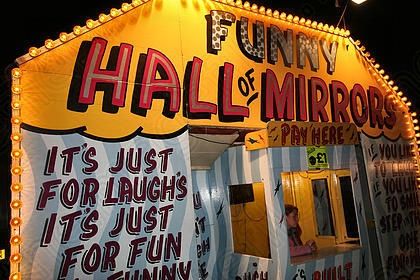 Mary Ann Kreitzer, the President of the Les Femmes-The Truth website, gave the Catholic Monitor permission to repost their great piece titled "When We Look at the World with Eyes of Faith...":

I expect most of us remember the experience of being at an amusement park or County Fair and going through the "Fun House Hall of Mirrors." Suddenly you see a strange person in front of you. Then you realize it's you, a distorted and strange caricature of yourself.

Guess what! That's how many people see the world -- a distorted and hideous mockery of reality.

I talked about happiness in two posts earlier this week. Many people create a distorted reality because they want to be happy. In fact, they insist, "I have a right to be happy!" And then they write the script they think will help them reach their goal.

"I'm a woman trapped in a man's body. If I just change my body, I can be happy."

"If I can make a million dollars, I can be happy."

"I want to finish my education and this baby is in the way. If I have an abortion I can be happy."

"I want to be an important person. If I win this election or be the CEO of this company I can be happy."

But there's an important paradox that the worldly don't understand. I read about it this morning in the Office of Readings. St. John of Avila, Doctor of the Church, spiritual advisor to St. Teresa of Avila and St. John of the Cross among others wrote this in a letter to his flock:

Dear brothers and sisters, I pray God may open your eyes and let you see what hidden treasures he bestows on us in the trials from which the world thinks only to flee. Shame turns into honor when we seek God's glory. Present affliction becomes the source of heavenly glory. To those who suffer wounds in fighting his battles God opens his arms in loving, tender friendship, which is more delightful by far than anything our earthly efforts might produce. If we have any sense, we shall yearn for these open arms of God. Can anyone but a man in whom all desire is dead fail to desire him who is wholly lovable, wholly desirable?

Think of fairy tales where the prince takes on any hardship or impossible task to win his beloved. Think of all those who torture their bodies to win a medal at the Olympics. Think of the mother who labors in pain to give birth and immediately forgets the pain in the joy of welcoming her newborn baby. Many joys and much happiness only come through intense effort, even suffering. But St. John goes on:

If you long for these festivals of heavenly joy, if you want to behold them and take part in them, be assured that there is no better way to reach them than the way of suffering. This is the way Christ and his disciples have always traveled....God grant that our hearts may find no rest and seek no other food in this world, save in hardship and suffering beside the Lord's cross.

"Festivals of heavenly joy...[reached by] the way of suffering." What a paradox! Joy and suffering united by Christ on the cross. If only we could truly understand that suffering is the fastest road to "heavenly joy." Wouldn't our attitude toward the challenges and difficulties of life change? Wouldn't our mourning turn into joy? Even as we walked the path of suffering wouldn't we see the heavenly Jerusalem before us?

St. Therese of Liseux said she preferred vinegar to honey. Was she a masochist? I don't think so. But she recognized that the thing that unites each of us most closely to Christ is the cross. And true joy is found when we embrace the cross and walk in the footsteps of the Master. 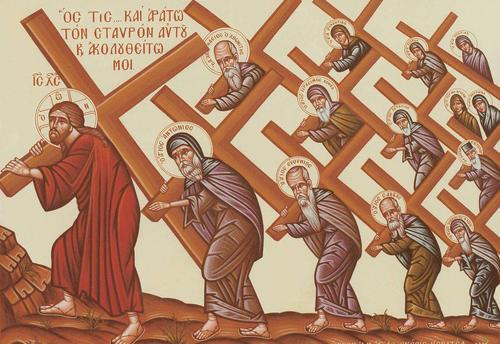 I remember the poignant scene in The Passion of the Christ when Jesus, burdened with the cross, kisses it. Do we kiss the crosses in our lives? I wish I could answer with a resounding, "Yes!," but that would not be true. Too often I run away. "Not that, Lord. Anything but that!" Ah...but how patient and gentle He is with me. "Rest in my love. I'll give you the grace of acceptance. You may not understand now, but you will. Trust in Me." And so I take one step in faith and wait for Him to lead me on.

"My Jesus, I trust in You." [https://lesfemmes-thetruth.blogspot.com/2021/05/when-we-look-at-world-with-eyes-of-faith.html]