CNN-NPR Journalist "Embedded" with Arrested Leftist "John Sullivan During Siege of US Capitol" & Might FOX, NBC & others, also, be Accomplices? 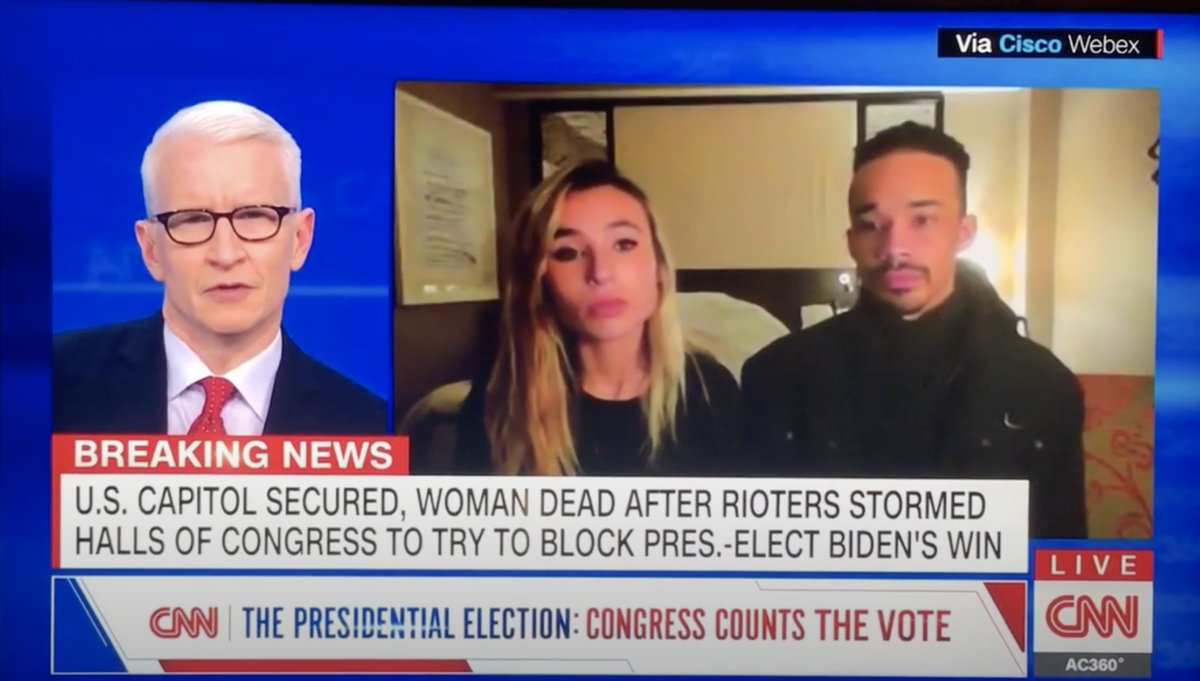 Glenn Greenwald@ggreenwald
The 3 journalistic units most devoted to demanding online censorship are CNN's media reporters, NBC's "disinformation team," and NYT's tech reporters. - Glenn Greenwald, co-founder of the award winning Intercept intelligence liberal new outlet [https://twitter.com/ggreenwald/status/1350075640444284928]
It appears that CNN may be an accomplice with photo-journalist Jade Sacker who apparently was "embedded" with the fringe leftist activist John Sullivan and CNN collaborator who is charged with participating in the Capitol incident according to Gateway Pundit. [Feds charge [Leftist] ANARCHIST who appeared on CNN after telling Capitol rioters to ‘burn this sh*t down’: https://www.rt.com/usa/512571-capitol-riot-anarchist-provocateur-fbi/]

Gateway Pundit reported "CNN-NPR Photo-Journalist Jade Sacker was Embedded with Antifa Leader John Sullivan During Siege of US Capitol – Cheered “We Did It!” After Inciting Riot (VIDEO)":

From our earlier report —  Footage obtained by the Gateway Pundit from militant Black Lives Matter and Antifa activist John Sullivan’s Discord server shows the so-called “civil rights activist” reveling inside the U.S. Capitol on Jan.6 as he damaged federal property.

Sullivan has maintained in multiple interviews that he regularly attends protests only to record what’s going on, but did not actively partake in the insurgence in Washington.

“It’s just recording, solely, and not being active in it,” he told Fox News last week.

After the Capitol was stormed John Sullivan appeared with CNN photojournalist Jade Sacker on CNN that night.  CNN did not identify Sullivan as an Antifa-BLM protest leader.  They mention Insurgence, USA but not that it is a radical leftist organization.  They do not mention that Sullivan was arrested in Utah during unrest in 2020.  CNN did not reveal that the two were working together inside the US Capitol.  Jade Sacker has done work for NPR, CNN, NBC and other liberal outlets.

Yet, in footage streamed to his followers on Discord, Sullivan, who uses the name “Jayden X” on the app, can be heard inciting violence from inside the U.S. Capitol and boasting about breaking a window.

“If we don’t get in, we’re going to burn this sh*t down,” he gloats. “Let’s go! This sh*t’s ours. F*ck yeah. I can’t believe this is reality. We accomplished this sh*t. We did this sh*t together.

Should CNN be kicked off the airwaves?

This footage comes from a source who wishes to remain anonymous for security reasons.

Moments after Sullivan captured Air Force veteran Ashli Babbitt getting shot and killed in the Capitol, a blonde woman accompanying Sullivan who appears to be his accomplice, Jade Sacker, gleefully exclaims, “We did it!”

“You were right! We did it,” she boasts.

“Dude, I was trying to tell you. I couldn’t say much,” Sullivan replies. “Is this not going to be the best film you’ve ever made in your life?”

While the FBI and the mainstream media insist there is no evidence Antifa or BLM played any role in the deadly mob that stormed the Capitol last Wednesday, Sullivan admits in the footage that he strategically wore a Trump hat and carried a “big ass camera” at the rally to guise himself as a journalist and mislead law enforcement and the media about his true motives. [https://www.thegatewaypundit.com/2021/01/huge-cnn-npr-reporter-jade-sacker-embedded-antifa-leader-john-sullivan-siege-us-capitol-cheered-inciting-riot-video/]

Note: What is needed right now to save America from those who would destroy our God given rights is to pray at home or in church and if called to even go to outdoor prayer rallies in every town and city across the United States for God to pour out His grace on our country to save us from those who would use a Reichstag Fire-like incident to destroy our civil liberties. [Is the DC Capitol Incident Comparable to the Nazi Reichstag Fire Incident where the German People Lost their Civil Liberties?: http://catholicmonitor.blogspot.com/2021/01/is-dc-capital-incident-comparable-to.html?m=1 and Epoch Times Show Crossroads on Capitol Incident: "Anitfa 'Agent Provocateurs'":
http://catholicmonitor.blogspot.com/2021/01/epoch-times-show-crossroads-on-capital.html?m=1]

Note: Please put the Church, America, President Donald Trump and Archbishop Carlo Maria Viganò  in the following Prayer of Command intention against the "satanic forces" unleashed against them: