Are Francis & his Ally China about to go down like the Titanic? 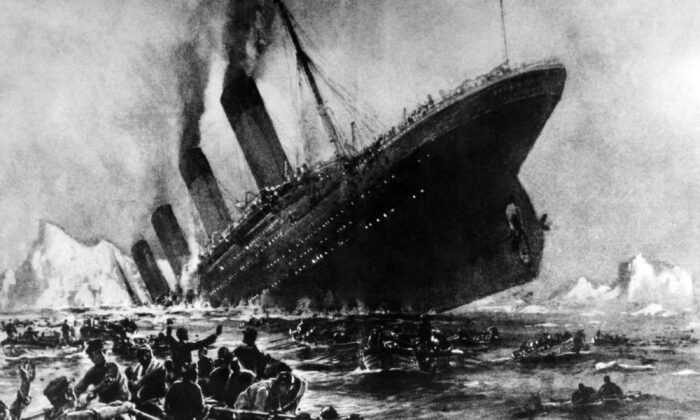 Undated artist impression showing the April 14, 1912, shipwreck of the British luxury passenger liner Titanic off the Nova-Scotia coast during its maiden voyage. (OFF/AFP via Getty Images)

Thomist scholar Dr. Taylor Marshall who heads the New Saint Thomas Institute in his YouTube channel said the Francis Vatican's biggest concern in 2020 will be "money" because their money sources such as in the United States and other places are drying up.

Marshall stated that the Francis deal with China which betrayed the Chinese Catholic underground Church is about "money":

"They are worried they are going to lose all the money... [their] striking the deal with China is a way to get money from China."
(Taylor Marshall.com, "When Pope Francis Slapped Woman's Hand: Predictions," 49:18- 49:50)

Most international and Vatican observers appear oblivious to the crumbling of Francis's apparent Vatican geopolitical Socialist alliances and that those alliances are financially supported by China and if Marshall is right the Vatican wants that same financial support.

Any one who has read Francis's only book "Dialogos" with it's praise of the Cuban Revolution and looked closely at some of his Vatican political maneuvers, such as the China/Vatican deal, the Obama/Cuba alliance, the Vatican/Evo Morales alliance and the Vatican protection of the Cuban controlled dictatorship of Venezuela (by the continued call for "dialogue"), can speculate that his probable political hopes are crumbling.

His apparent main political vision of the spreading of China's puppet Cuba's influence throughout Latin America as a so-called counterbalance to the United States' influence in the region now appears to be falling apart.

It may be possible that Francis agreed to the Vatican/China deal which betrayed the Chinese Catholic underground Church because without China's economic assistance Cuba's economy would resumable the Venezuelan starvation economy, but maybe more importantly "to get money from China" as Marshall said.

Now, with reports that the Hong Kong freedom protests have spread to the most important province in China - Guangdong - in terms of population and economic power it appears that the Chinese Communist totalitarian regime is in a dilemma.

If they crack down on the powerhouse economies of Hong Kong and Guangdong the already downward spiral of the Chinese economy may begin a collapse of the whole country. That appears to be the only reason they are not destroying the Hong Kong freedom fighters as they murdered the Tiananmen Square freedom fighters in 1989.

Anyone who has studied the murderous history of the totalitarian regime of China is hard pressed to not call that dictatorship: evil.

It is a very sad commentary on the current moral situation of the Catholic Church to observe the Francis Vatican's apparent collaboration with China is possibly "a way to get money from China."

If it is true that Francis's Vatican has an alliance and is financially supported by the Chinese regime it appears that if the Chinese owned Epoch Times is correct then Francis may have to go down with a “sinking boat" called the "Titanic":

When China’s economy was close to falling off a cliff, Western countries bailed out the CCP. With the opening of trade and the U.S. market to China, China privatized a lot of land and companies, but CCP officials and their relatives got the lion’s share of opportunities.

The CCP used the ideals of socialism to rob people of their property, then privatized it into their own hands.

Among top officials, there’s a secret plan for a “sinking boat.” They’re insiders and know better than the majority of Chinese how corrupt the system is and that it’s not sustainable. These CCP elites don’t take China as their home country. They see the country as a place temporarily held by them where they can grab money and prepare to leave.

That’s why they’re willing to kill the goose that lays the golden eggs, just to get a few eggs right now, as in Hong Kong. It’s the same model that’s applied to the entire country. China is only a temporary hunting ground for grabbing money.

In 2012, the following internal data leaked out: 90 percent of central party committee members had relatives and children who had emigrated to foreign countries; 85 percent of top officials were ready to abandon their positions and escape the country.

That’s why China doesn’t allow any officials above mid-level local positions to hold their passports. The higher the position, the more the CCP officials know that the CCP crisis is reaching a boiling point. They’ve moved their assets out, prepared to run away, and are even prepared in an emergency to destroy the central database to cover their tracks.

That’s part of their plan for the “sinking boat.” That’s why they use state money to corrupt international officials, make friends with many countries, and generously spread money to some foreign lands while giving very little to their own people.

Taiwanese economist Wu Jialong said that a Taiwanese businessman told him that Jia Qinglin, the former chairman of the Chinese People’s Political Consultative Conference, “hired a private jet loaded with gold, dollars, euros, and more, and flew to Cambodia.”

One can see why the CCP cares even for small countries.

The majority of people in China don’t know it’s a sinking boat. They enjoy as much as they can while ignoring how the CCP corrupts the morality of society, just like the drinking, singing passengers on the sinking Titanic.

What top CCP officials are most afraid of is Western countries’ sanctions of individuals.
[ https://www.theepochtimes.com/the-chinese-communist-party-is-sinking-like-the-titanic-but-officials-have-a-plan_3382776.html]

The Bear said…
It’s the money. That’s why Bergoglio is re-purposing the Church into non-Christian leftist cheerleader-state relevant only because the Pope is spending moral capital earned by 2000 years of saints. No more claims of exclusiveness for Christ or the Church—no stumbling blocks on the glorious road to a secular tomorrow. Brilliant survival strategy in a post-Christian world after Catholics voted with their feet post V2. To those with eyes to see God has given 20/20 vision this year.
8:14 AM

AMalek said…
Money, yes, but the CCP and the Conciliar Church have the same employer. They also have his agenda in common-total control of the world and the extermination of Christianity.
11:10 AM

And here we all are, in the gathering concensus against this great evil - clarity is growing and the enemy now appears uncertain, desperate, their advance tenuous in the face of the growing resistance, disgust and anger.
12:16 PM

Fred Martinez said…
The Bear is back and Bergoglio better beware of the Bear.
12:23 PM

Michael Dowd said…
Bear sniffs out lies and roars when he finds them. When it comes to the Bergolian Catholic Church near everything is a lie or obfuscation. Expect Bear to be very busy.
6:07 AM