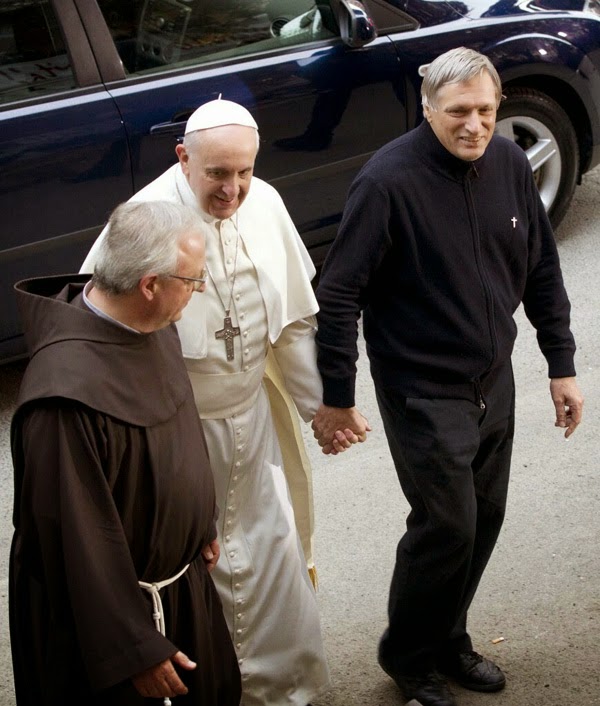 "Do you remember a time when a priest could march alongside miners and auto workers and look like one of them, not like a breathless female reporter in the locker room of a football team?"

"...And now this, about Cardinal McCarrick.  The cardinal... has pointedly not said, “I have never had sexual relations with a seminarian or a priest.”  It was a perversion of the male protective brotherhood, whose noblest and purest manifestation is the apostolic band."

"Unlike those brothers the apostles, who went forth into the world to lay down their lives for Christ and the Church, these bands in our day have used the Church as a cover, and a means of procurement. They have turned the Church inward upon themselves and their essentially narcissistic and childish desires and deeds."

"We should not then be surprised that the Church, in their hands, becomes contentedly anti-apostolic and anti-evangelistic. The leaders make common cause with ambitious women against their enemies: ordinary, healthy, self-assured, masculine men and the women who love and esteem them."

"The Mass itself is made soft and effeminate." [https://www.thecatholicthing.org/2018/07/05/vesting-in-lavender/]

Can anyone imagine the "soft and effeminate" Cardinal McCarrick and Fr. Martin marching "alongside miners and auto workers and look[ing] like one of them, not like a breathless female reporter in the locker room of a football team?"

Can anyone imagine Pope John Paul II or even Pope Benedict XVI strolling hand in hand down the street with a male gay rights advocate? [http://catholicmonitor.blogspot.com/2018/06/pope-franciss-mccarrrick-like-himtoo.html?m=1]

Can anyone imagine John Paul II or Benedict promoting homosexuality with the Amoris Laetitia Heresy of "conscience is supreme" as Francis and Martin are doing?

Francis's recent words against gay marriage and Martin's claim that "he has never challenged Church teaching on homosexuality" are empty or meaningless unless they condemn the heresy of the "conscience is supreme" also called the primacy of conscience which is promoted by Amoris Laetitia as I show in my article "Is Pope Francis a 'Atheist."

"Previous Popes – including John Paul and Benedict – tried to quash
the views of theologians who didn’t tow the party line and promote the moral supremacy of the Church’s teachings...If Pope Francis is indeed promoting the Catholic teaching of the primacy of conscience... It may show people that it’s OK to be both Catholic and part of, say, the LGBT community – because that is what God is instructing them to do in their hearts... The primacy of conscience is the idea that God’s voice lies in your soul, and it is a sin not to listen to it. It is reconcilable with the notion that the Church is a moral authority, though only if it can be fallible and challenged by human conscience, as Pope Francis himself is showing." [https://www.google.com/amp/s/matteogagliardi.com/2014/04/02/the-primacy-of-conscience-the-only-way-forward-for-the-catholic-church/amp/#ampshare=https://matteogagliardi.com/2014/04/02/the-primacy-of-conscience-the-only-way-forward-for-the-catholic-church/]

"[T]he primacy of conscience, which must always be respected."[https://www.americamagazine.org/faith/2017/11/11/pope-francis-reaffirms-primacy-conscience-amid-criticism-amoris-laetitia]

Francis's Amoris Laetitia promotes the primacy of conscience heresy also called the"conscience is supreme" that tells the sexually active homosexual who commits objective mortal sins of sodomy and anyone in objective mortal sin that they are not in sin if they are at "peace" with it, if the sinful behavior is "humanly impossible" to change, "if they can't change their sinful behavior" or don't know it is wrong as I document in the article "Is Pope Francis a 'Atheist.'" [https://catholicmonitor.blogspot.com/2018/01/is-pope-francis-explicitly-atheist.html?m=1]

"So, if Martin is explaining Catholic teaching on homosexuality in America, but at the same time refusing to acknowledge that his statements have departed from Catholic teaching, and even continuing to say things that would imply a departure from Catholic teaching, what is he doing? I see two possibilities. One is that he knows he is in a contradiction and is playing games—saying one thing to satisfy his superiors and critics, but other things to his fans. If this is the case, he is being deceitful. The other is that he is being clever, by which I mean that he feels he is avoiding contradictions by way of certain theological stratagems that we know only too well.'

"... The Freedom of Conscience Theory (or 'Conscience is Supreme' Theory): Conscience does not apply moral norms of natural and divine law to concrete situations. It creates the moral norms themselves. It thus stands in judgment over (i.e., is supreme over) the moral norms taught by the Church. Hence, 'Yes, I affirm that according to the magisterium, homosexual acts are gravely sinful. (But if your conscience tells you such acts are perfectly good, you should do them without guilt, because your conscience is supreme.)'”

"Such thinking is very much alive, if not habitual, to theologians on the left. A few years ago, I interviewed a prospective teacher to work in the theology department of our school. I had reservations about this person’s orthodoxy, so I said to him point blank: 'In our high school, we strive to present the Magisterium of the Catholic Church faithfully, and to teach it to our students as persuasively as possible. Can you see yourself as contributing to this mission?” He replied with enthusiasm, 'Absolutely!' But as it turned out, it wasn’t quite the case. I am not saying the person lied. But the way I understood the words 'magisterium' and 'faithful' were quite different from the way he understood them. (I have always thought it would be fun to write parody lyrics to Cole Porter’s 'Always True to You Darling.' They would read something like, 'I’m always true to Church teaching in my fashion. I’m always true to Church teaching in my way.')"

"I have seen the same over the years among priests. Some of the most vociferous dissenters I have known would insist that they were loyal to the Church and became greatly offended at any suggestion that they were not." [https://www.crisismagazine.com/2018/professor-george-can-hold-fr-martin-accountable]

You don't have to believe Fr. Peter Pilsner or me in order to know that the primacy of conscience teaching also called the"conscience is supreme" is heretical. Just read Pope John Paul II's  Veritatis Splendor:

"Certain currents of modern thought have gone so far as to exalt freedom to such an extent that it becomes an absolute... This is the direction taken by doctrines which have lost the sense of the transcendent or which are explicitly atheist. The individual conscience is accorded the status of a supreme tribunal of moral judgment which hands down categorical and infallible decisions about good and evil... But in this way the inescapable claims of truth disappear."[http://www.catholicworldreport.com/Item/5346/a_malta_laetitia.aspx]

Say an Our Father now for the restoration of the Church and that the primacy of conscience heresy is this year condemned by those clerics in the Church who are faithful to the God-man Jesus Christ and to His Revelation.