Would Cupich give "Prolife" Hitler Communion since he Fought Against Joblessness & Anti-Environmentalism Despite his Cutting Up & Killing People?

In his interview with Face the Nation the then Archbishop Blase Cupich was asked:


"When you say we cannot politicize the communion rail, you would give communion to politicians, for instance, who support abortion rights."

Cupich said on Face the Nation in 2014 that he would give Holy Communion to pro-abortion politicians:

"I would not use the Eucharist or as they call it the communion rail as the place to have those discussions or a way in which people would be either [sic] excluded from the life of the church. The Eucharist is an opportunity of grace and conversion. It’s also a time of forgiveness of sins. So my hope would be that that grace would be instrumental in bringing people to the truth." [http://www.crisismagazine.com/2014/on-giving-communion-pro-abortion-politicians]

In 1933, when the Nazis came to power, one of pro-abortion politician Hitler's first acts was to legalize abortion for the "health of the mother" which meant abortion on demand. By 1935 Germany had 500,000 abortions a year.[http://www.klannedparenthood.com/nazis-and-abortion/hitler-was-pro-choice/]

Cupich stated that pro-abortion politicians like Hitler should receive Holy Communion and he, also, explicitly said cutting up babies is morally equal, much the same as, joblessness and other issues. The Chicago Cardinal said:

"While commerce in the remains of defenseless children is particularly repulsive, we should be no less appalled by the indifference toward the thousands of people who die daily for lack of decent medical care; who are denied rights by a broken immigration system and by racism; who suffer in hunger, joblessness."

In 2015, Cardinal Cupich sounded like a Nazi sympathizer when he compared the genocide and mutilation of unborn babies to joblessness and other issues.

Would Cupich call Hitler "Prolife' since he Agreed with many of his Consistent Ethic of Life Stances?

Hitler agreed with many of Cupich's consistent ethic of life stances.

The Cardinal and Hitler stand united in the following consistent ethic issues. The Nazi dictator fought against joblessness and anti-environmentalism.

The progressive pro-Cupich magazine Commonwealth reported that Pope Francis, in an article titled "How Pope Francis Reframed the Politics of Being 'Prolife,'" now says:

Being "prolife" is not a "single-issue" and, also, means '''the environment devastated by man's predatory relationship with nature'... undocumented immigrants and unemployed workers."
(Commonwealth, By John Gehring, September 13, 2017)

Since pro-life is not a single issue then by Cupich's Nazi sympathizer-like reasoning then Hitler's grisly death camp genocide should be counterbalanced by the fact that the Nazi government reduced unemployment from six million to one million and was one of the first to create environmental protection laws.

Francis and the Cardinal in their statements down play the abortion genocide while making climate change a top priority and appear to, also, equate environmentalism (and even tobacco smoking which was just outlawed in the Vatican) with having a consistent ethic life position.

By their reasoning Hitler was pro-life since it's not a single issue and he agreed with many of Cupich and Francis's consistent ethic of life stances.

Hitler had a "stance against Tobacco use" and the "Nazi's were the first to create environmental protection laws in history" according to the Nazi sympathizer website europeanknights project.com.
(12 Things You We're Not Told About Adolph Hitler and Nazi (NSDAP) Germany," January 13, 2017)

The scholarly book "How Green Were the Nazis?: Nature, Environment, and Nation in the Third Reich," also, impartially reports that Hitler's government "mounted the most effective anti-smoking propaganda campaign ever before 1980" and "nature protection and conversation laws... from an environmentalist perspective, the best in the world." (amazon.com/go/aw/reviews/082141672, First review)

Lifesitenews.com pointed out that Cupich said abortion "is a 'controversial issue.' It needs to be 'put behind us so the government can focus on it's budget.'"

This statement sounds like something similar to what a Nazi sympathizer would say:

The Jewish genocide is a "controversial issue," it needs to be put behind us so the government can focus on it's budget, joblessness, environmental issues and train prices.

The Lifesitenews responding to the Chicago Cardinal's statement said:

"Your Eminence, abortion is immoral because it kills... Dietrich Bonhoeffer didn't fret about train prices in Nazi Germany. He spoke truth to power about the genocide of Jews and eventually lost his life."
("Cardinal Cupich shows his priorities in responses to two different tragedies," November 8, 2017, Lifesitenews.com)

"Cupich indicates there’s a moral equivalence between abortion and other moral issues." 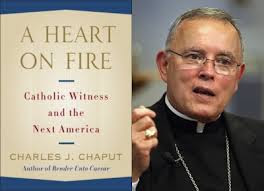 Most Reverend Charles J. Chaput: “The deliberate killing of innocent life is a uniquely wicked act”.

"None other than Philadelphia’s archbishop, the Most Reverend Charles J. Chaput has fired back.

Archbishop Chaput wrote in his August 10 editorial for Catholic Philly:

'Here’s a simple exercise in basic reasoning... theft is bad, assault is worse and murder is worst. There’s a similar texture of ill will connecting all three crimes, but only a very confused conscience would equate thieving and homicide. Both are serious matters. But there is no equivalence.'

'A case is sometimes made that abortion is mainly a cultural and moral issue, and politics is a poor solution to the problem. The curious thing is that some of the same voices that argue against political action on the abortion issue seem quite comfortable urging vigorous political engagement on issues like health care, homelessness and the environment.'

'When it comes to moral issues, basic reasoning oftentimes proves more valuable than nuance... The latter obfuscates and confuses, as it blurs the distinctions and degrees separating good from evil, leaving people wondering what’s good and what’s evil.'" [http://cal-catholic.com/nuance-vs-clarity/]

Pray that the US Bishops put someone to Chair their Pro-Life Committee who doesn't have a "very confused conscience" and that doesn't have people "wondering what's good and what's evil."

Say a Our Father for that intention now.

Fr. VF said…
Chaput says he cannot distinguish between a pro-life candidate and an abortion fanatic: